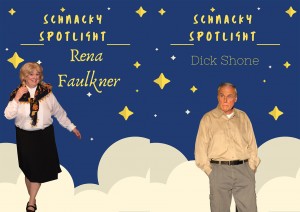 Rena Faulkner heard about the Monsignor Schnacky Community Players back in 2004 when she worked with someone who was in the show and tryouts were coming up so her friend asked her to come audition. Rena was nervous, but auditioned. The first show she performed was “Be-Dazzled and Boo-Razzled” in 2004. There were skits that year and she played Gloria from “All In The Family” and had a blast being on stage with Don Cicchino and Travis Piper. She has made many dear friends through the Schnackys. “They are there for you even after the show is done. From

As most Schnackys can agree, Dick Shone is one of the most influential members of the group. From his unwavering positivity, excellent jokes and arguably the best-hugger out there, Dick has made a real impact on us all. He has been a member of MSCP since 1983 and he is still involved today. Before each show, Dick asks us all “who makes this show work?” and then goes around the circle saying “YOU! YOU! YOU!” He makes us all feel included and like we are a part of something bigger than ourselves. He has been an excellent MC welcoming the crowd every year with his jokes and warmth. We have been so blessed by his presence every year and he really pushes us to keep moving forward especially with those Irish eyes a smilin’.  Thank you, Dick, for your friendship and encouragement. You have a special place in our hearts.