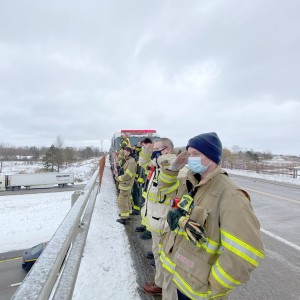 This photo shows Fishers and Honeoye Falls firefighters saluting as the procession passes by under one of the bridges over Route 390. Photo by Davin Eshelman

On Wednesday, January 27, firefighters, first responders and police officers from around Monroe County and Livingston County honored Army National Guard soldier Christian Koch as the hearse from John W. Martin Funeral Home in Mount Morris carrying his body left the Monroe County Medical Examiner’s Office to head to the funeral home. Koch was one of three National Guardsmen killed in a helicopter crash in Mendon on January 20. The bodies of the other two soldiers, Steven Skoda and Daniel Prial, were taken to Fort Drum on Tuesday, January 26 and they were also honored by area firefighters, first responders and police. The procession for Koch was led by police agencies down East Henrietta Road and Route 390.