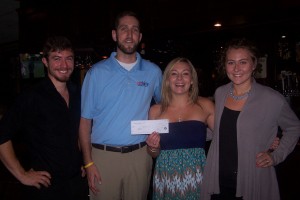 Anthony Cunningham, a golfer in the tournament, Josh Symer from 13thirty Cancer Connection, Jessica Flaherty, co-coordinator of the event for Flaherty’s, and Cyndi LaPietra, a hostess at Flaherty’s in Honeoye Falls. Photo by Donna MacKenzie

This year’s Flaherty’s Charity Golf tournament held at the Lima Golf and Country Club, July 10th was a huge success with donations adding up to $5000 to be donated to 13thirty Cancer Connection.

Jessica Flaherty, bartender and manager at the Honeoye Falls location presented the check to Josh Symer, the special event coordinator for 13thirty Cancer Connection. Symer, who has been with the organization for just over a year, said that 13thirty provides those ages 13-30 who are battling cancer with their own set of peers going through the same thing.

“I have a connection to battling cancer as my aunt is a breast cancer survivor, but this group targets help and support to those young people battling the disease,” he said.

Flaherty, who co-coordinated the event for Flaherty’s with Leah Dalton, stated that this is the third annual golf tournament sponsored by Flaherty’s. “We choose different local organizations to help each year,” she said.