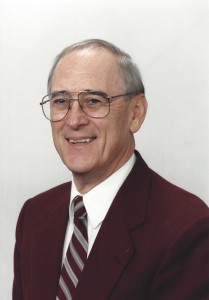 The phrase “Elder Statesman” is a fitting one to describe former Mendon Town Supervisor Arnold “Jack” Leckie as Mr. Leckie was truly someone whose wise advice and counsel were sought by town leaders of both political parties following his retirement from public office at the end of 1997.

Mr. Leckie served as a Town Board member for Mendon for 10 years and was Mendon Town Supervisor for another 10 years. During his tenure, he was instrumental in the acquisition of the Upper Mill for use as the Mendon Town Hall and helped maintain the rural character of Mendon by serving on the original Master Plan Committee for the town in the late 1970s (the first Master Plan was adopted in 1981) and helping update the plan in 1990.

“Jack was always concerned about the long-term,” current Mendon Town Supervisor John Moffitt stated. “He knew there had to be growth, but also controls to preserve history and some of the structures in our town and I don’t mean just houses but also barns. He just always wanted what was best for the town.”

According to a letter of recommendation sent by the late Charles Meisenzahl when Mr. Leckie was being considered for the Honeoye Falls-Lima Alumni Hall of Fame in 1998, Mr. Leckie always did what he felt was the best for the people in the town of Mendon, even if at times his decisions did not sit well with the town’s Republican Committee. At one point, he was forced to run in a primary in order to get the party’s endorsement and because of the people’s trust in him, he got it. That did not make the town Republican Committee happy, according to the letter of recommendation, so in the next election, Mr. Leckie was backed by the Democratic Committee to run as a town councilman. Not only did the people of Mendon vote for him but for many of the other Democratic candidates as well. He was also willing to reach out to Democratic elected officials.

“Jack was one of the first people who reached out to me when I was first elected to be the town supervisor after a very rough election,” said former Mendon Town Supervisor Morris “Moe” Bickweat. “He called me within the first week of my being in office and, in his humble manner, offered his assistance and his knowledge. During the four years that I was supervisor, I established an incredible friendship with him. Politics never entered the question when we were together, but only what was good for the Mendon community. Not only was he a good role model, but his vast knowledge of the community and its history was an incredible resource. He was just a wonderful guy.”

A native of Mendon, Mr. Leckie was a 1948 graduate of Honeoye Falls High School. He played baseball and basketball in high school, being a member of the Honeoye Falls Hornets team that won a Section V Class C basketball title. Following high school graduation, he attended Genesee Junior College in Lima (now Elim Bible Institute). Although he had originally intended to transfer to Cortland State to become a physical education teacher and a coach, he had a change of heart after learning there were few openings at the time for physical education teachers. He took a job instead with Dunn Oil Company in Mendon where he was treasurer for many years.

Mr. Leckie, who was inducted into the HF-L Alumni Hall of Fame in 1998, became more involved in community affairs. He worked on the Town Recreation Commission and then the Town Assessment Board of Review. Mr. Leckie also joined the Honeoye Falls Rotary Club. After serving on many committees with the club, he was elected President of the Rotary Club in 1972.
In 1978, a position on the town board opened up and Mr. Leckie made his first run for public office and was elected a town board member in the fall of 1978. He served in that position until being elected Town Supervisor in 1984, succeeding the retiring Supervisor Robbie Barnes. Mr. Leckie served as Town Supervisor for 10 years. He then served another six years as a town board member before retiring at the end of 1997. Among his other accomplishments as town supervisor were introducing a town newsletter to keep residents informed of what was happening in town government and helping bring cable television to the town. He also served as President of the Monroe County Supervisor’s Association.

After his retirement, he still stayed active by being a member of the town’s Historic Preservation Committee.

“The historic preservation committee was very important to him,” Moffitt said. “I knew Jack my whole life and he was good friends with my uncle Bob. After I became supervisor, I met with him early on many times and Jack, Moe Bickweat and I met often.”

Other ways, Mr. Leckie served his community over the years was in the New York National Guard and as treasurer of the Mendon Fire District as well as being a member of the Mendon Cemetery Association.

Mr. Leckie’s love of sports continued even after high school as a member of the town’s Husky Farmers’ semi-pro baseball team and the town’s Honeoye Falls Merchants basketball team.

Memorial services will be announced at a later date.  Donations may be made to any of following organizations in Jack’s name: ALS Association, American Cancer Fund, Mendon Cemetery Association, Honeoye Falls-Mendon Ambulance, or Benincasa-Mendon. Arrangements are with Merton H. Kays Funeral Home in Honeoye Falls.