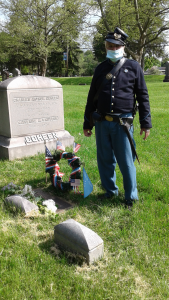 This is a photo of Shaun O’Brien in a ceremony to our Civil War Medal of Honor winner Charles Goheen. Shaun fired muskets as we performed our ceremony across the street. Photo by Deb Milne-O’Brien

On this occasion due to the Covid-19 pandemic, we held a private ceremony to honor our fallen heroes. We marched from the Post home to the memorial. We lined up and a small speech was recited honoring our fallen heroes and our current first responder heroes.

We then had a laying of a wreath by the Women’s Auxiliary, a rifle salute and Taps was played. We then played the Star Spangled Banner and finished with a cannon salute.

We are dedicated to this community even during these tough times. Our members serve on the Marine Corp Counsel and volunteer at the Veteran’s outreach center. We also support other Legions in the area through volunteers and donations.