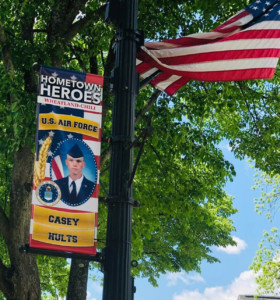 BY JENNIFER CROWLEY
In addition to holding its annual Memorial Day Parade and Remembrance Ceremony on May 27th, the Village of Scottsville unveiled eleven “Hometown Hero” banners adorning light posts on Main Street. This program honors active military personnel with personal or familial connections to the Wheatland-Scottsville area.

Each 44 by 16-inch double-sided banner features the name, photo, and branch of the servicemember honored. The artwork featured on the banners was created by Wheatland-Chili High School Senior Allissa Merritt. Fellow senior Valerie Saucke designed small garden flag versions of the banners that will be for sale.

The current eleven banners on display will hang alongside American flags until November. They feature the following military personnel:

Upon completion of service, each featured Hero will receive his or her banner.

The Hometown Heroes Program is overseen by a committee of volunteers including Karen Lee Wilson, Scottsville Mayor Eileen Hansen, Trustee Leslie Wager, Darryl Cady, and Karen Nash. Area residents Jan Brewster, Liz Streb, and David Burns each made generous donations to seed the program and the Committee is grateful for their support.

Anyone wishing to nominate a servicemember meeting program criteria should call 889-5483. Donations to fund the printing costs of the banners are welcomed by The American Legion Smith-Warren Post 367, 61 Main Street, Scottsville, NY 14546.