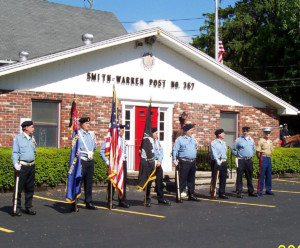 This photo shows the Smith-Warren Color Guard in 2005 with legion member Nick Pearl in his Marine’s uniform at far right. Submitted photo

The Smith-Warren Post 367 in Scottsville is celebrating its 100th anniversary this year, the same year that the national American Legion organization is commemorating its 100th year.

Sometime in 1919 a meeting of Scottsville WW I veterans was held in the yard of what is now known as Hanford’s, also known as Col. Brown’s, on Genesee Street. Army veteran, Robert J. Murphy was the driving force behind the formation of Smith-Warren Post 367. Murphy was also the first Commander of the Post. The Post was granted a charter on September 8, 1919, by the Department of New York. The Charter members of Smith-Warren Post 367 were John Clydesdale, Joseph Tyler, Roger Clydesdale, George Jarret, Joseph Piaty, Stewart Warren, Robert Murphy, Mike Tony, Albert Ackerman, Howard Willis, William Osmon, Arthur Trigg, John Kalaher, Orrie Newman and Fred Clark. The last WW I member of the post, Curtice Booth, died in 1989.

The Post was named after Warren N. Smith and his cousin William J. Warren. Warren and Smith were members of the 78th Division, 310 Infantry. Warren N. Smith was a private in Co. K. He enlisted April 4, 1918. He was killed in action, September 21, 1918 by artillery fire while returning from a volunteer mission to the rear to bring up more ammunition. He was returned and buried in the Oatka Cemetery in Scottsville.

William J. Warren was a private in Co. C, of the 78th Division, 310 Infantry. He enlisted February 2, 1918 and died of pneumonia February 17, 1919. He is buried in the American Military Cemetery in Saint Mihiel Thiau-Court, France. 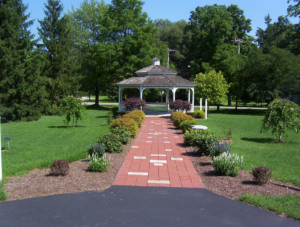 The gazebo and memorial walkway at the Smith-Warren Legion Post. Submitted photo

After receiving the Charter, the Legion meetings were held in Windom Hall (Scottsville Library), various homes, and the old Fire House (now Wheatland Town Hall). The Post at some point started meeting in the basement of the old Oatka Hotel, which was owned by Mr. Woodard at the time.

On December 14, 1937 the current Post Home at 61 Main Street was purchased for $1,200 and $75.00 for the furnishings. This property belonged to the Baptist Church. The Post was incorporated at that time as well. The mortgage was held by Dr. Clarence Pearson and the Commander was John Leonard Sr. An addition was added to the back of the building in 1954, and the large meeting hall in 1977. The handicap ramp entrance and restrooms were added in 1992.

The Smith-Warren Post 367 Auxiliary was started in 1924. With the purchase of the Post Home in 1937, this organization was invited to meet there as well.

Smith-Warren Post has supported many of the American Legion programs, including Boy’s State, Oratorical, Boys Scout Troop 140, Child and Youth. The Post has also hosted two County Conventions, one in 1958 and one in 1993. The Post also hosted one District Convention in 2006. Three members have served as County Commanders, Robert Murphy, Ernie Swingle and Sam Gallo. Ernie Swingle served as 7th District Commander and Department Vice Commander. The current 2019-20 Monroe County Commander is Charlie Clark, a member of Smith-Warren.

The Post is preparing for our 100th Year Anniversary to be held September 21, 2019. There will be displays of the various wars and of Legion information, and other community events. The Post Home will be open to the community, with food, activities for children, music, speeches, sales of 100-Year Commemorative Coins, and sales of WW I Scottsville Veterans Book authored by Town Historian, Barb Chapman. There will also be a WW I memorial tribute.