Taps ring out in Mendon on quiet Memorial Day

Home Taps ring out in Mendon on quiet Memorial Day 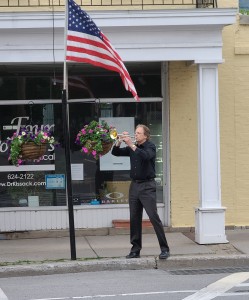 BY DEB AND TIM SMITH
It all started on a very quiet Memorial Day when we were sitting out in front of our house near the four corners of Mendon working on an article for the Sentinel. Ever since the Covid-19 kicked in it’s been quieter but it was more noticeable on that particular day. For the first time in all the years we’ve been here, and God knows how many more years before that, no Memorial Day parade had passed our place. The resonating silence was deafening.

But then the silence was suddenly broken. Initially startling, and then pleasantly pacifying, the sound of a trumpet playing “Taps” rang out from the four corners. As our gaze drifted in the direction, we focused on the silhouette of a man standing alone, in front of the Cottage Hotel, serenading the silent hamlet with the sweet sound of his trumpet.

After finishing his 24-note salute, we watched him walk across the street, get in his car and drive away. It was over almost before it started and we didn’t have time to walk to the corner and acknowledge his efforts like we would have done had we known the performance was going to occur.

Reflecting in the aftermath of the moment, we looked at each other with tears coming to our eyes and felt a need to offer some type of acknowledgment. The only thing we could think to do was go to the HF-L Mendon Community Facebook page and describe the incident that moved us so deeply. As it played out almost 200 people responded favorably with several people asking if we knew who the musician was.

The whole thing happened so quickly that even if it had been someone we knew, making a positive ID would have been difficult. But then in one of those kind of cool small town moments Bill Krause sent us a message informing us that he was our guy.

This led to a chain of communications that enables us to flesh out the rest of the story for you. Bill had been inspired by a CBS news segment called “How to Participate in Steve Hartman’s ‘Taps Across America.’” The gist of it had been that Hartman had wanted to play tribute to the many veterans who did not receive their traditional Memorial Day accolades due to Covid-19. To that end, he encouraged anyone who had the means to do so to go outside at 3 pm on Memorial Day and play an impromptu “Taps” for any audience who might be within earshot.

Bill accepted the Hartman challenge and played on his front lawn on Monroe Street at 3 pm. Encouraged by the enthusiastic response he received, he decided to deliver four encore performances at dusk, two in Mendon and two in Honeoye Falls. Turns out his first encore performance was the one we witnessed at Mendon’s four corners around 8:30 pm.

Following that he drove to the cemetery in Mendon where “Taps” would have played earlier in the day had there been a parade. As he began his second Mendon performance he knew there was a possibility that the sound would be absorbed by only the tombstones. He added that he was extremely touched when on the other side of Mendon Ionia Road two boys were excitedly waving at him and two women came out of their houses to thank him.

Then it was back to Honeoye Falls where he had a 9:00 start time scheduled at the Mendon Community Center’s memorial flag display on North Main St. The final performance had been scheduled for 9:10 at the four corners of Honeoye Falls.

Bill is a member of the Honeoye Falls Community Concert Band whose summer schedule was yet another victim of the virus. In interviewing Bill for this story he felt it was important that we share some of the emotional impetus connected to his musical initiative. His father and both of his brothers served in the military. Because of his family’s involvement Bill said, “It was meaningful and a pleasure to do this, not only for my family but for all veterans in our community.”

It proved to be yet another example of how our community has pulled together to help one another get through this current crisis. We’ll close by sharing the first words Bill responded with upon coming across our post about him on the HF-L Mendon Community Facebook page.

“Deb & Tim, Thank you for expressing the emotion this elicited. When playing into that empty space, you never know how many – or if any – ears are out there to take it in. Thus, to learn that it was heard and impactful is very contenting. Regards, Bill.”