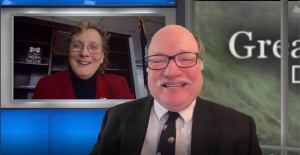 The following is an abridged transcript of the State of Greater Western New York Report, hosted by Sentinel Publisher Chris Carosa. This report aired live at noon on Thursday, January 21, 2021. Are you interested in seeing the entire interview? Go to https://stateof.greaterwesternnewyork.com/2021/01/21/january-21-2021-state-of-greater-western-new-york-report-interview-with-marjorie-byrnes-assemblywoman-133rd-district/.

Chris Carosa: Hi, everybody! and welcome to the State of Greater Western New York Report. Today we’ll be talking to Marjorie Byrnes. She’s the Assemblywoman from the 133rd district and represents that portion of the Greater Western New York region that includes southern Monroe County, Livingston County, and parts of Steuben County. Perhaps she can explain a little bit about that. Let’s get started right away and just say hello. Assemblywoman Byrnes, how are you doing today?

Assemblywoman Marjorie Byrnes: I’m doing very well. Thank you for having me on. I appreciate it.

Chris Carosa: Well, let’s just turn the ball over right to you and have you tell us a little bit about the State of the State Address that you saw last night from the Governor and what you thought about that.

Assemblywoman Marjorie Byrnes: I listened to the entire State of the State and also the budget address, which Governor Cuomo did this week as well. It certainly was very grandiose our State has a lot of needs. It has needs with housing and unemployment, he centered almost exclusively at the beginning about Covid vaccinations and the fact that to get our economy going – to get our lives going – the first thing we really need to do is to defeat and overcome the Covid-19.

He went on from that to talk about a lot of specifics and some generalities. Some of those things that he mentioned, I thought had particular interest to the 133rd District. As you mentioned, I do represent Pittsford, Mendon, Rush, and Wheatland in the County of Monroe. I represent all of Livingston County. And in Steuben County, I also represent five towns, including Prattsburgh, Dansville, Wayland, Cohocton, and Hornellsville, which includes the City of Hornell.

The reason I mentioned that is because sometimes when I’m talking to people in upper Livingston and Monroe, they don’t realize that I stretch to the Southern Tier. So that the issues I’m looking at that affect my district can sometimes be a little broader than some of the ones that we look at in Monroe.

“One of the things that the governor specifically detailed in the State of the State and addressed it again in the budget address, was the fact that he wants to continue to expand green energy and certainly we all want that as an objective. But sometimes the devil’s in the details. So, it is important to look at and understand how he is looking towards achieving some of his goals.

One of the things that the governor mentioned was that he wants to accelerate a number of large electrical projects, electric generating projects, some of which have already begun, others are in the planning stages. In the Western New York area there are approximately 100 projects, I believe, in all. This includes the Horseshoe Project – the Livingston County/Monroe County project in the Towns of Caledonia and in Rush – which was specifically mentioned in the State of the State.

Governor Cuomo indicated that he wants to accelerate these programs. One of the things that I’ve been fighting for is to have local control – local input – so that our people in our municipalities are able to express themselves and make sure whatever projects that we do as a State are projects not only that are good for the State, but they’re also good for our communities. And that’s why I think it’s important to have local input and home rule on all of the projects.

What the governor indicated is that he wants to continue the process that we have now, which is total state control – no local rule – and that the energy would be generated upstate but that they would be working specifically on electric lines in order to convey the electricity from upstate to downstate. There was no talk about how we can utilize the energy that we generate in our areas for our communities or to reduce our electric bills.

It was all very clear that whatever we generate, if it’s in the northern part of my district, where there’s a number of solar projects, in the southern part, when we start getting down into the Dansville Valley in the hills and Prattsburgh, it’s wind projects and wind turbines, which used to be about 500 feet, all the new versions will be 700 feet tall.

So they are definitely things that concern neighbors. And that’s why I would like more input from our communities before we rush to create projects that may or may not be suitable for a given area.

That was one thing. The other thing that he stressed was that he wanted to work on telemedicine.

I’m absolutely a proponent of telemedicine and the more we can utilize it, especially in this day and age where we need to do more and more over computers. It is obviously very important.
But it feeds into another thing that the Governor talked about and that was broadband and the importance of everybody in New York State being tied in to not only having accessible broadband, but also affordable broadband. The governor talked, and it is an important subject, about the cost, where some people spend hundreds of dollars a month in order to have adequate connections to appropriate internet service.

But one of the things I was discouraged by is that he repeatedly referred to 98% of New Yorkers being accessible to the internet and I really do not believe that is the case. My experience through all the people who have contacted me – I know we’re going to talk about this later – so I just want to touch on it in that it’s not the case.

While it is very important that broadband be portable, before it can be affordable, it needs to be accessible. So my push is still to make sure that we have accessibility as we partner with looking towards affordability.

So those are just a few of the things that jumped out at me in particular about my district that I wanted to touch upon. My concerns overall with the State of the State and with the budget address is that, as we enter into this budget cycle, we’re already $15 billion in the hole. We don’t know how much money we are going to get from the federal government, the governor actually proposed two budget scenarios, one if we get 6 billion from the feds and another if we get 15. So we really aren’t sure where we’re going on that.

The reality is we have a money crisis. We have a cost crisis. There are probably going to have to be some serious cuts made and my concern is that some things that the governor expressed and I know that it’s only the beginning of the budgetary process, but I just don’t believe they’re going to overall be affordable for the entire State, given the economic climate. Thank you.

Chris Carosa: That’s great. Let’s talk a little bit more about this broadband issue because I think that it’s a combination of affordability and accessibility. I know, for example, that a number of Buffalo Bills fans who were in the Boston area could not watch the game on broadcast TV. There’s a problem with NBC over there. They had to watch it on broadband. And I think it’s not just businesses who are going to be concerned about broadband. It’ll be individuals, too, like you mentioned with telemedicine.

The idea of accessibility probably comes first, before affordability. What’s your gut feeling about accessibility, particularly in the region that you serve.

Assemblywoman Marjorie Byrnes: It was only a year ago that Livingston County did an entire survey in the County in order to determine the extent of the problem. We all believe there was a problem. They wanted to nail it down. And what they found was that there was a significant – and I’m just talking about Livingston right now, they did their own survey, Jefferson County up in the north country is now going to be doing their own survey – they found that it would be $30 million just to connect every resident unserved right now in Livingston County to appropriate broadband Internet service. They have applied for USDA grants for that purpose.

But in my experience, the phone calls we get are so heartfelt with people who have not been able to have their kids do their online school learning because either they don’t have internet or it keeps crashing because it’s not powerful enough. People that were working from home during this pandemic that weren’t able to be appropriately engage in that. Businesses that were trying to survive, and or even ones in the normal time, that in some areas, even in Caledonia where you want to run your business and be able to take a payment via a credit card online. They have trouble sometimes connecting with the computer systems crashing.

It’s things I’ve heard about. And it’s not just in the rural areas. It’s not just in the hills of Prattsburgh and in Dansville. I’ve had the monks at the Abbey call up to say that they don’t have appropriate broadband to even run their store to sell Monks Bread.

And people who live on Oatka Trail in Mumford, who are desperate. What they’ll talk about is that when they call up the companies and that companies will come so far on a road. They might stop – whatever reason: the end of a zip code, or, we’re not even sure why – at one pole and then they won’t go any farther. And when the person at the next house down the line says I need to get hooked up, too, what the companies tell them is, “Well, that’ll be $20,000. You’re not in the area that we serve.”

Well, they go to 100 feet away, and they claim you’re not in the area that they serve. There are a lot of costs. Fiber optic, I’m told is very expensive. A year ago, New York State added a fiber optic tax which is even more of a burden on the rural areas. It’s by the foot. If somebody wants to use a pole that doesn’t have fiber optic cable already on it, they have to actually pay by the foot a fee to the State to use the State right of way to connect. Especially in the rural areas where these lines are quite long. It’s really becoming cost prohibitive.