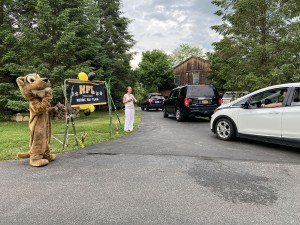 While there were no hugs or hand shakes or the traditional senior speeches to recount their memories of the nordic season, the HFL Varsity Nordic ski team had a driveby banquet.  The “Banquet by Car” last night was an ingenious way to decipher a way around a tricky situation, said Coach Bernie Gardner.   The line of cars were greeted by the Cougar mascot courtesy of Kate Dailor as they proceeded around the horseshoe driveway lined with Nordic season photos.   Seniors received their gifts at one stop, Nordic ski yearbooks at another, and an opportunity to thank coach Bernie Gardner and honor Jana Gardner on her retirement this season. We wish Jana Good Luck in the future. She has been an integral part of the HFL Nordic program for decades first as modified coach then as Varsity Coach. She has done countless behind the scenes work that often goes unnoticed and will be greatly missed. Athletic Director Brian Donohue was present to congratulate seniors and participate as well.