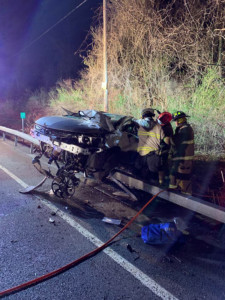 On Tuesday morning April 24th at approximately 2AM, the Honeoye Falls Fire Department was dispatched to the intersection of Rush Lima Rd(15A) and Monroe Street for a pole down with wires in the road.

Engine 563 responded with Chief Dave Hood. Upon arrival Chief Hood discovered a car on top of the guard rail with a person trapped as well as a pole and wires in the road. An alarm was sounded for additional manpower.

The crews worked quickly to free the trapped driver of the vehicle. The sole occupant was extricated quickly and transported by ambulance to the hospital with non-life threatening injuries. Following extrication, the vehicle and road hazards were secured. National Grid arrived on scene to replace two snapped power poles and numerous wires in the road. Their work lasted most of the day.