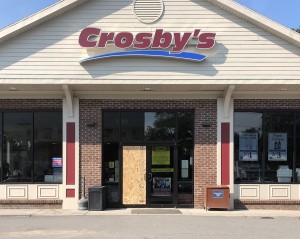 Someone threw a rock through the glass doors at Crosby’s in Mendon early in the morning of Tuesday, September 8, and stole packs of cigarettes. This photo shows the door all boarded up later in the morning. Photo by Betsy Carosa

During the early morning hours of Tuesday, September 8, a person threw a rock through the front door at Crosby’s in Mendon and stole packs of cigarettes.

This happened before the store manager got there to open the store at 6 a.m., so thankfully no one was hurt.

Business owners in the area, such as Hilary Stott from the Cottage Hotel, have offered to check their security cameras to see if the person was caught on camera or a car and a license plate number.

Reports have circulated that the Valero in Honeoye Falls was targeted last week.