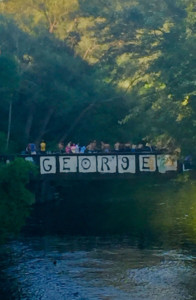 A picture of the eponymous George Bridge taken on Sunday, July 1st at 7:00 p.m. with many eager jumpers waiting for their turn. Photo by Jennifer Crowley

Next on the list is Scottsville, New York (population 2,000) with its very own and simply named “George Bridge.” The structure is a pedestrian bridge accessible through the village’s Canawaugus Park. The Park offers green space, picnic tables, benches and close proximity to the Genesee Valley Greenway Trail.

Not surprisingly, “George Bridge” has had a few different names since the 1880s when it was constructed as part of the Pennsylvania Railroad, Rochester Branch. It was once known as the Genesee Valley Canal Railroad bridge and was later renamed the Pennsylvania Railroad bridge. The bridge become informally known as the Aqueduct amongst community members starting post WW-II.

So who exactly was George? That is an unfolding discussion between many longtime residents who spent youthful summer days jumping off of the former railroad bridge into the cool and appropriately deep waters of Oatka Creek below. It was during the 1960s that the bridge was painted with the name GEORGE on it and the rest (mostly) is history. Some 50 years after its christening, there is still debate around which one of three young men named George had the foresight to paint his name on the bridge’s exterior, permanently adding to village lore. Stay tuned for more on that.

Given a gorgeous canopy cover and easy access to Oatka Creek, a long tributary of the Genesee River, George Bridge has rightly earned a reputation for being one the area’s ‘hidden gem’ swimming spots. The location offers a perfect break for those hiking the Greenway Trail, an 84-mile lined trail extending south from Rochester that is adjacent to the Park. The Trail uses rail beds of the historic Genesee Valley Canal and Railway. Old canal lock ruins are in fact still visible along the route which passes the Erie Canal trail, Erie River Trail, and Lehigh Valley Trail.

Since as early as the 1930s kids and adults of all ages have been jumping or swinging off of the bridge on hot summer days. And it seems that everyone who grew up in the area has indeed taken the plunge from the George. Those wired to seek more adventure in life tell stories of jumping off of moving trains into the water below. Other accounts of days (and nights) at the Bridge suggest that a snapping turtle lived in the creek banks just to heighten the excitement of the experience.

Certainly the desire to make memories at George Bridge is not limited to those living in the immediate area. Social media posts and travel guide coverage have helped generate interest in the old school bridge. From morning until night during the recent heat wave, sizable groups of people were seen waiting on the bridge for the chance to descend. And with a brief walk to the village’s eating establishments and historic district (not to mention the very warm weather forecast), it’s never been a better time to cross a bridge jump off of a bucket list.

For those looking to check out what the Park has to offer, it is only a short drive from Rochester, 15 minutes south of the airport. Adult supervision of jumpers is highly recommended. You Jump At Your Own Risk.