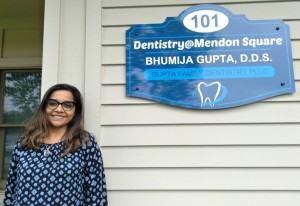 Dr. Bhumija Gupta poses outside her dental office in Mendon. Photo by Deb and Tim Smith

BY DEB AND TIM SMITH
When Bhumija Gupta was a girl in her native India, she dreamed of playing cricket. But on one fateful day, competing against the boys, she broke her hand and her mother pulled the plug on her participation in the sport. But what was the cricket world’s loss turned out to be a blessing for the world of dentistry.

Dr. Gupta became a dentist in 1991, earning her first degree in India. An obvious question on our minds when we met Dr. Gupta was how and why she had made her way to America. Her immediate response to that was, “Love makes you do crazy things,” a response that obviously begs for further clarification.

When she first met her future husband Sam, he had returned to the New Delhi area, where they both lived, from his engineering job in Toronto. Upon their marriage, she returned with him to Canada where they started their family.

In 2009 they made the move to Rochester and it was time for Dr. Gupta to get back to doctoring. U.S. regulations were such that she had to complete another 4-year program at the Eastman Institute for Oral Health. This she did from 2009-2013 and at that point she began to practice in Gates.

It was the retirement of Dr. Virginia Fusaro-Kaufer that led Dr. Gupta to buying her practice with the goal of maintaining her team practice with her Gates gig and focusing on developing a solo practice in Mendon. We were so impressed with Dr. Gupta that we both signed on as patients, hopefully contributing to her forward momentum.

In addition to her standard practice, she has a team of other doctors and specialists with whom she works. She offers extensive services including pediatric dentistry with nitrous sedation, oral surgery, implants, root canals, cosmetic dentistry like veneers, and invisalign treatments.

When we asked her about why she enjoyed being a dentist, she said “I love to build a personal relationship with my patients and treat the person, not just the tooth”. Dr. Gupta’s motto is Care, Comfort and Convenience.

She is an author of about fifteen scientific publications which have been cited heavily, a book chapter, and she has also been a recipient of many scientific awards. Dr. Gupta has been extensively involved in all aspects of dentistry and has a great comfort level working with all patient populations.

Anytime we do a story on a local business we always ask about funny or bizarre related stories that can be shared. And in this case the doctor did indeed have a doozy! This one occurred when she was in general practice residency at Strong.

Part of her 4-year certification program was a component where she had to spend time at the Emergency Room where the purpose of the “class” was that she would be exposed to a wide range of issues which would enhance her overall medical expertise. So it was not specifically related to dentistry, just medicine in general.

In this setting Dr. Gupta describes herself as the overzealous type, always wanting to learn and learn while showing great ambition. “Is there something I can do,” is her oft-repeated mantra. In an effort to curb her enthusiasm, one ER doctor employs a unique strategy. He tells an ER resident to take her to a specific room.

What mysteries does this room hold? Here’s where the aforementioned “doozy” kicks in. She arrives to find a man with a bottle stuck up his backside and a resident trying to extract it. Obviously there has to be an intriguing back story (pun intended) to what led to this situation, but that will have to be left to your imagination.

Multiple residents have made a variety of attempts to remove the bottle, but with no success. While her role in the room was just to observe, keep in mind our use of the word “overzealous” a few paragraphs ago.

Dr. Gupta chimes in with an enthusiastic, “Can I try? My hands are smaller.” You have to love the willingness to just jump in there and give that bottle a twist! The response received from the resident was, “It’s not the size of the hand; it’s the technique.” Eventually the bottle was removed and, as they say, “All’s well that ends well.”

Dr. Gupta’s practice is called “Dentistry at Mendon Square,” they are located at 10 Assembly Drive #101, and their phone number is 585-662-9852. Dr. Gupta and her husband, Sam currently live in Pittsford with their two wonderful teenage daughters.