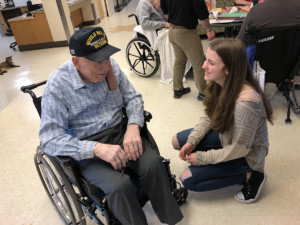 They became Sister Cities in June 2011. Since then community members have been attending fundraisers and donating time, talent and dollars. Donations help the children get an education as well as helping other groups such as farmers who needed tools after a flood washed theirs away.  Many of our community have met Francius Estimable Dauphin (Johnny) who runs the program in Borgne.

2019 marks the 10th year Friends of Borgne have supported projects in this small town dispersed over miles of dirt paths requiring long walks to get to school. For the last four years, the HFL Sister Cities Youth Group has supported Friends of Borgne fundraisers in addition to initiating their own projects in the community. Last year several members graduated from HFL High School. Many used their experiences helping others in the community in their college entrance essays and personal statements. They described the impact of participating in projects like traveling to Guatemala to help out at an orphanage and hospital, making dinner for residents at the Ronald McDonald house or making packets for homeless people distributed at Dimitri House in the city. Joan Haviland, a guide for the group, listed over 20 projects the group did in the 2017 – 2018 school year! 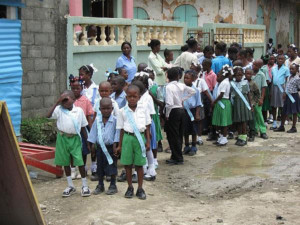 School kids in Haiti who will benefit from the Crock Pot Craze fundraiser. Submitted photo

Leah Greenich, a current youth group member, is just one example of the youth’s enthusiasm to make a difference in their world. She will be helping with Crock Pot Craze on October 27. Meanwhile she and another member, Regan Webster, organized a bowling fundraiser to benefit the Breast Cancer Research foundation October 18 at Miller Lanes. After a visit to the Canandaigua Veterans Hospital 2 years ago with her high school flute choir, she arranged to repeat visits twice a month through the recreational therapist (she is pictured with Les, a 101 year old resident and WW II veteran on page 1.) She continues to support other youth group projects, too!

The Crock Pot Craze will feature a feast prepared by talented cooks from our community. Come enjoy dinner, help a great cause and applaud our young volunteers for all they do in the community.