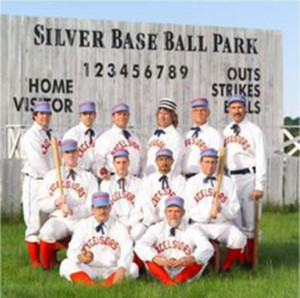 BY DEB AND TIM SMITH
You may be surprised to discover that within our own home turf for which the Sentinel is the official newspaper, you can find the only authentically reproduced 19th-century base ball park in the United States.  Called Silver Base Ball Park, it’s located at the Genesee Country Village & Museum in Wheatland, and yes “base ball” was two words back in the 1800’s.

Around the country, there are over 50 organized teams who compete, playing by 1860’s rules, under the umbrella of the Vintage Base Ball Association.  This weekend GCV&M will be hosting its annual National Silver Ball Tournament from Friday, August 9 through Sunday, August 11.

Because the GCV&M ball park is considered the most outstanding vintage park in the country, their tournament assumes the mantle of being the most prestigious of the summer, attracting teams from the Eastern seaboard, the Midwest and Canada.

WHAT’S THE DIFFERENCE? ~ If you find yourself intrigued by this event you’re probably wondering how does play differ from modern day baseball?  We’ll highlight the four most significant differences below.

The pitcher (hurler) delivers the ball to the hitter (striker) underhanded with both feet on the ground, from a position 45 feet from the home base (which is a white metal plate 12 inches in diameter).

No gloves or protective equipment is used.

An out is recorded if a batted ball is caught in the air or on first bounce.

Pitches are not called “balls” or “strikes” by the umpire.  The batter stays up until he either hits a fair ball or misses on three pitches.

So the batter can strike out, but he cannot walk.  Rules that remain the same are that the four bases are each 90 feet apart and teams get three outs per inning, with a complete game consisting of nine innings.

WHAT TO EXPECT ~ Visitors can view the games from wooden bleachers that face an outfield fence sporting period-style advertising.  A manual scoreboard is operated by two young lads on scaffolding, while a press box tower is home to a tally keeper and announcer. Concessions are available and include peanuts, birch beer and other period-appropriate food.

If you’re not familiar with Genesee Country Village & Museum here is our quick overview.  GCV&M is a working 19th century historic country village with the largest and most comprehensive collection of vintage buildings in New York State, and the 3rd largest in the country.  GCV&M falls into the category of what is called a “living history museum”, the general definition of which would be that it is a museum exhibiting the way people actually lived in a different time period.

The tournament begins at 5:00 on Friday and runs through the weekend with the first pitch of the championship game being delivered by the hurler to the striker at 2:00 on Sunday. Admission for everybody is half price on Saturday and Sunday, and all little league players who wear their uniforms on Sunday get in free. Museum hours are 10 am-4 pm Tuesday-Sunday. The John L. Wehle Art Gallery and the Nature Center is also open. We’ll be there and hope to see you too.