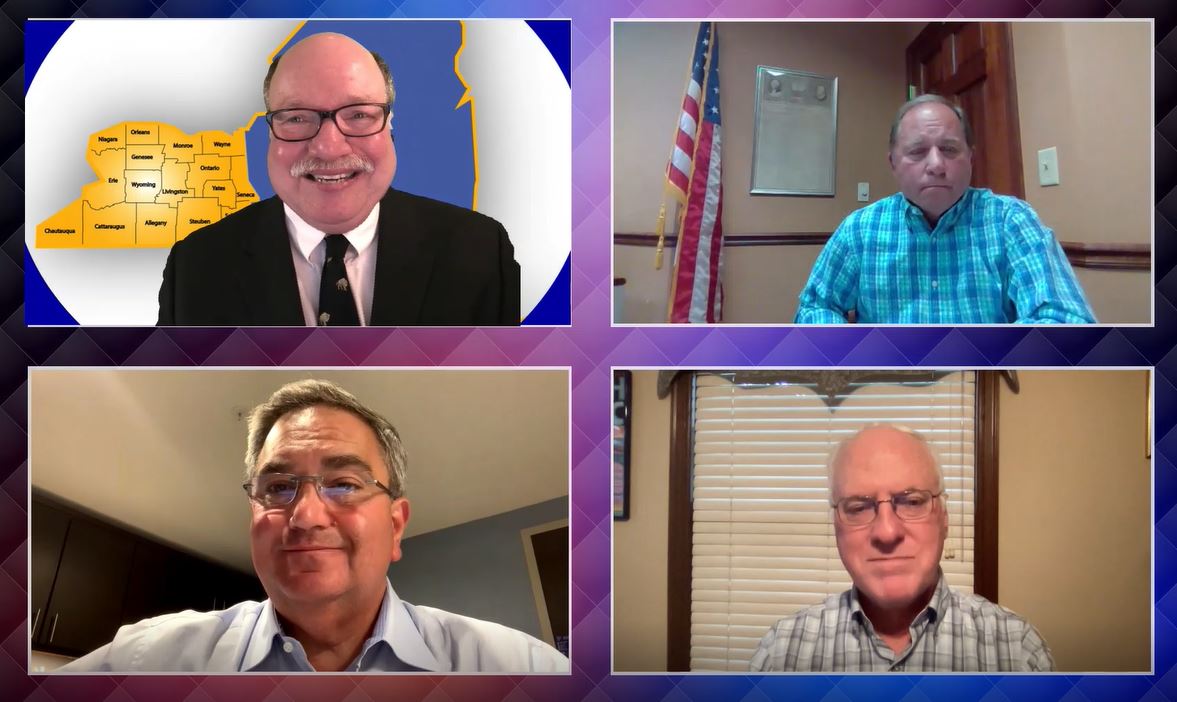 Chris Carosa, publisher of the Mendon-Honeoye Falls-Lima Sentinel, hosted the event that was co-sponsored by several newspapers in the Western New York District of the New York Press Association, including the Mendon-Honeoye Falls-Sentinel, the Alfred Sun, The Batavian, Neighbor-to-Neighbor newspapers (including the Arcade Herald, the East Aurora Advertiser, the Springville Journal, Warsaw’s Country Courier, and the Franklinville Mercury-Gazette), and the Johnson Newspaper Corp’s western New York papers (The Daily News and the Livingston County News).

The event was free and open to all residents of the Greater Western New York Region and more than one hundred people signed up in advance to register to attend the event. Invitations were also sent to the county chairmen of the Democrat, Republican, and Conservative parties (as they were the only parties whose county chairmen’s emails were readily available on their websites).

The meeting started with three keynote speakers who each championed a different vision for an independent Greater Western New York Region. While they all agreed there was a disconnect between the priorities of New York City and Albany politicians and those of most people living in western New York, they each offered a competing solution.

Assemblyman Stephen Hawley of Batavia, who is sponsoring a bill which would give New York voters a chance to vote “yes” or “no” on a two-state model, kicked off the event. He said becoming a separate state offers a permanent solution, albeit one that requires both State and Federal agreement. Senator George Borrello of Jamestown is sponsoring a bill to split New York into three separate autonomous zones. While this plan does run the risk of being reversed by Albany, it has the advantage of not requiring action by the federal government. Rounding out the three keynoters, Buffalo author and attorney James Ostrowski, explained how nullification, which was successfully employed against the SAFE Act, represents the easiest path because it requires neither State nor Federal action as it relies solely on local elected officials. He explained that this non-violent form of protest has demonstrated far more consistent success than violent demonstrations.
After the individual presentations, the three convened a panel moderated by Chris Carosa, who reminded the audience that the topic of Greater Western New York Independence could not be more timely. Not only have several other states (notably, California, Oregon, Colorado, and Illinois) discussed this, but just earlier that day HillReporter.com reported the results of a new YouGov-BrightlineWatch poll that showed “…a shocking percentage of Democrats, Independents, and Republicans from every proposed bloc of states said that they would support secession.” Indeed, BrightlineWatch, which polls this question regularly, said in its analysis “rather than support for secession diminishing over the past six months, as we expected, it rose in every region and among nearly every partisan group.”

The two biggest questions from the Town Hall Meeting attendees to the panel dealt with how Greater Western New York could afford its independence and how, even if it became a new state, how would it address the “dictatorship of the majority” population-based representation that has led to much of the big city dominance over rural citizens.

With regard to the financial issue, Borrello said it’s a matter of spending, not revenues, and much of the spending in Western New York comes Albany directed mandates that would likely not exist in an independent Greater Western New York. Hawley added that independence might also make the region more attractive to businesses; thus, increasing revenues.

It’s a little bit more complicated than that, as regular viewers and readers of the SENTINEL’S weekly Mayors & Supervisors update have discovered recently. It turns out some of that “State” money is really from other sources and already earmarked for local communities. In a very real sense, the State is acting like a bank that parks customer money so it, not the customer, can earn the float.

“The American Rescue Plan funding was provided directly from the Federal Government to County Governments,” says Mike Falk, Supervisor of the Town of Lima. “By law however, the Federal Government may not provide money directly to the Towns and Villages. Town and Village ARP money was sent to the states to redistribute. NYS sent out paperwork, set deadlines and then applied to the Federal Government for an extension to hold the millions of dollars for an extra month – harvesting interest before the ARP funds are sent to Town and Village Governments. We will not see the first draw until August. The delay is one more example of NYS Government helping itself first instead of placing local municipalities first. Local ARP plans are on pause as a result.”
Borrello and Hawley, both Republicans, felt the population-based representation might be less of an issue even though they conceded the size of Rochester and Buffalo would make a Greater Western New York State more likely to vote for a Democrat. Several attendees pointed out that Buffalo appears to be on the verge of voting in the nation’s first major city socialist mayor and expressed less confidence that the population issue is solely a New York City issue.

The final portion of the meeting saw all the attendees enter three different breakout rooms to further discuss the options then vote as a group for their preferred choice. In an interesting coincidence, each group voted for a different option, with one group saying all three options should be viewed as a coordinated progression on a spectrum of action rather than distinct choices.
When everyone reconvened in the general meeting, they voted again, this time as individuals. In a perfect example of how population-based representation (the individual voting) can yield different results compared to geographic-based representation (the breakout rooms), the individual voting produced a solid winner. The separate state option was twice as popular as the autonomous zone option, which in turn was two times better than the nullification option.

The meeting proved so engaging that participants were eager to know when the next one will occur. Carosa promised the Sentinel would host another Greater Western New York Town Hall in October, and added there were other events and activities people might choose to get involved with if they didn’t want to wait until October. These, as well as a replay of the July 15th Town Hall Meeting, can be viewed under the Event’s Tab at GreaterWesternNewYork.org.