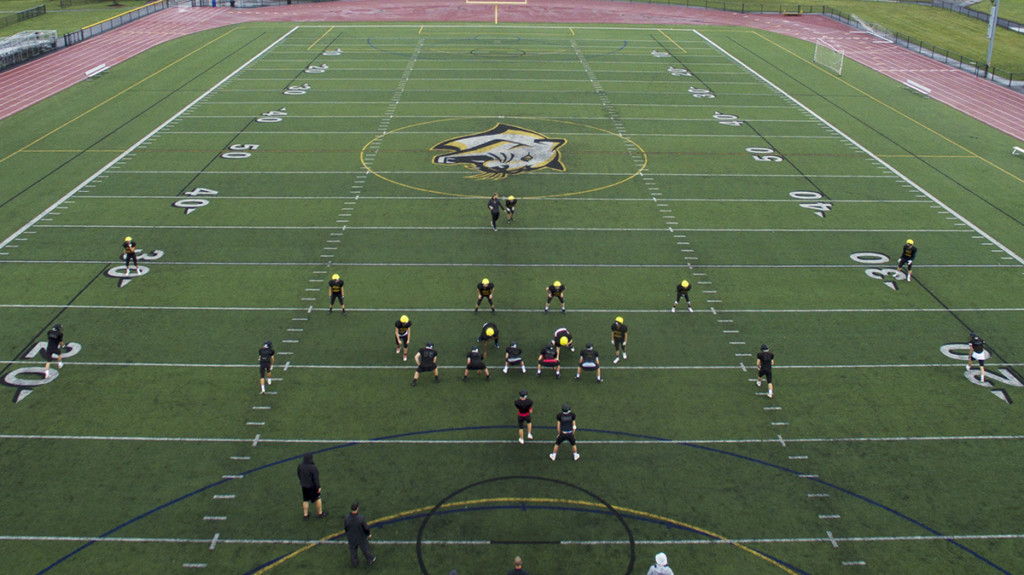 The Honeoye Falls-Lima Cougars preparing for their first game against Newark on Friday, September 6th at 7 PM. Photo by Peter Carosa

Last fall, the Honeoye Falls-Lima Cougars ended their best season under head coach John Russ. The team finished the regular season with six wins, including a pair of last second game-winning touchdowns earning them the nickname, the “Cardiac Cougars.” Their season came to an end in the semifinal round at the hands of the eventual Sectional Champion Batavia Blue Devils. During the winter, the Section V Football Committee chose to switch to federation scheduling, where teams play each other based on classification rather than league alignments. The Cougars were ahead of the curve on this as they competed as an independent picking their own opponents rather than participating in a league last season.

This past spring included optional workouts, 7-on-7s, and football camps. Participation for these voluntary events was consistently high. Senior Mason Ferrara mentioned how the team leadership has worked hard to establish this culture. Senior lineman John Kabes is the only returning starting lineman from a season ago and said that these optional drills were essential for getting the new guys caught up to speed. His hope is that fans will not be able to notice any differences in play from the lineman. Speaking of returning starters, in addition to Mason Ferrara, Senior Mitch Slymon is the only returning two-way skill starters. The pair will be flanked by a series of new faces making the jump from junior varsity. Although some of these players, including Colt Green (WR/CB), Patrick Lustyk (TE/LB), and Reese Joint (QB/WR), got valuable playing time during last year’s Sectional run. Not to mention the JVs finished 7-1 last season.

For the first time in a while, the Cougars have two quarterbacks on their depth chart that can win games. The QB room is made up of Senior Turner Wilson and Junior Reese Joint, who both bring different skills and abilities to the table. Of these head coach John Russ mentioned Wilson’s power run game and Joint’s overall athleticism. Whichever quarterback plays expect a dynamic offense. Especially with Mason Ferrara reprising his role with the Cougars. Last year he was named to the Fifth team All-State for his linebacker play, but he was exceptional in the backfield for HF-L as well.

As usual, HF-L has a seven-game slate with three home games and four away games. The Cougars will not be traveling as far as a season ago. Games two, three, and four will most likely be the most difficult; UPrep played two competitive games against HF-L last season, Batavia is the reigning Sectional Champion, and Brockport is a classification higher than the Cougars. These games will certainly be a tough test for the team and John Kabes says he already has their game against Batavia circled. Coach Russ says after game four, everyone will know what to expect from this team. Their fifth game against Midlakes will be HF-L’s homecoming as the match-up will be the centerpiece of Fall Weekend. For the last two games, the Cougars will be on the road against Wayne and Geneva. If Mason Ferrara gets his wish, HF-L will run the table through the Sectional Championship. Meanwhile, Coach Russ’ number one priority is qualifying for Sectionals, once in he can start to think about a championship.

Now I know what you are thinking, “he forgot to mention their first game.” Well I saved it for the end. The Cougar will open their season against Newark this Friday, September 6th at 7:00 PM. Be sure to be loud, be proud, and be positive!