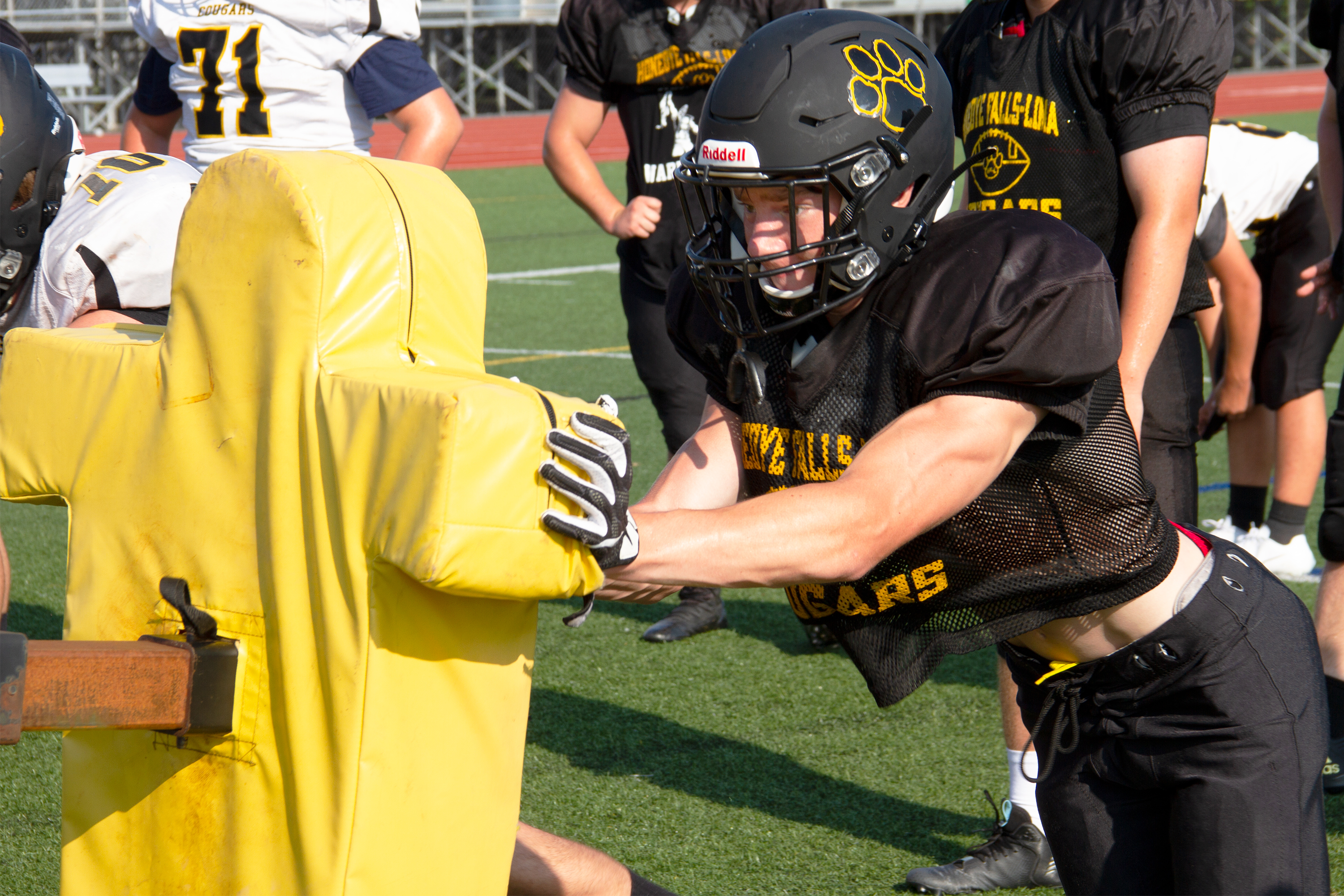 When the Cougars open their 2021 Fall Season on Friday, September 3rd, it will have only been 125 days since HF-L captured the district’s first football Sectional Championship. Despite the shortened offseason, the players still made the most of that time with weight training, optional 7 on 7 drills, and a July training camp. Practices began on Monday, August 23rd, and the Cougars will not be able to hold a scrimmage prior to their Week One contest.

This Fall, HF-L will be without a handful of players who graduated this past June, including Jacob Derby (1st Team Class B All-Star), Colt Green (1st Team), Reece Joint (Class B Player of the Year), Patrick Lustyk (1st Team), Sam Miller (2nd Team Class B All-Star), Mason Wanzenried (1st Team), and Nolan Yates (2nd Team). However, three players from the 1st and 2nd Team lists will be returning, Mitchell Bulling (OL/DL), J.T. Killenbec (WR/DB), and Nolan Smith (WR/DL). Other returnees include Charlie Kirby (OL/DL), Carson Joint (OL/LB), and Zachary Meacham (RB/LB). All three were named as Honorable Mentions to the Class B All-Star lists.

The Cougar offense will be led by a new signal caller this season. Senior Brody Young got reps at quarterback in five of HF-L’s games last Spring. He completed just under fifty percent of his passes attempted, but threw for three scores, including a 51-yard touchdown pass to J.T. Killenbec in the Sectional Semifinal against Pal-Mac. Senior J.T. Killenbec and sophomore Nolan Smith will likely be the favorite targets for Young. Head Coach John Russ noted that Smith is “6’ 5” with long arms and huge hands; all you have to do is throw the ball to Nolan and he’s a kid who can go get it.” During the Sectional Championship game last Spring, Nolan Smith hauled in three catches for 56 yards, including a 31-yard touchdown reception. Alongside Brody Young in the backfield will be senior Zac Meacham, who ran the ball efficiently this past season when the Cougars were chewing the clock late in the game. Meacham average just over 6 yards per touch. Head Coach John Russ said Meacham “is a big weight room kid; (Meacham) put on a ton of muscle over the last year and a half, so we are looking for big things out of him this season, especially at the running back position.” Meacham will be the beneficiary of the Cougars’ returning three of their starting offensive linemen from last season. Mitchell Bulling, Carson Joint, and Charlie Kirby will reprise their roles on the O-line. Coach Russ praised Bulling, the three-year two-way starter for HF-L, who “knows the game very well and is hands down our leader.” Fun fact about Charlie Kirby: last Fall he was the third string quarterback for the Cougars, but by the time the Spring season began he was the starting right tackle. Kirby unselfishly chose to switch positions, because the team was in need at that position.

All of last season Coach Russ touted the four starting defensive backs as the leadership of the defense. With all four graduating, this responsibility will shift to the three returning linebackers: Rhyan Garey, Carson Joint, and Zac Meacham. Joint will serve as the defensive signal caller. Coach Russ mentioned that Joint “plays very quick and now trusts his reads after getting better and better every week last season.” The new defensive starters for HF-L benefited from a healthy amount of playing time last season as a result of the early lopsided scores. In some cases, the Cougars’ second-string defense got reps against the opposing teams’ first-string offense. Special teams’ contributors from a season ago, such as senior Hayden Meehan, will now have the opportunity to make big plays for the defense. Speaking of special teams, senior J.T. Killenbec, will be returning as the return man for HF-L. Killenbec who Coach Russ described as “a game changer who we want to get the ball to as much as possible; whether it’s a deep ball, punt return, or kick return.” Killenbec had some key returns during the Cougars’ Sectional Championship run and returned a punt 52 yards to the house during the regular season game against Pal-Mac.

Back to an eight-game slate, the Cougars will be playing an equal amount of home and away games (see schedule below for games that will be broadcast live by the Sentinel). Of their eight opponents, HF-L played five of them during the Spring 2021 season. The Cougars were scheduled to play six, but HF-L received a win over Geneva last season due to forfeit. One of the teams the Cougars will face has switched classes: Wilson Magnet has moved down to Class B.

Right out of the gate, HF-L will face stiff competition. The Livonia Bulldogs won the Class C Sectional Championship this past Spring. The last time these two former Livingston County League rivals faced one another was the 2019 Class B Sectional Championship. Other games of note include their October 8th meeting with the Batavia Blue Devils, which will be a rematch of this past season’s title fight.

Fans should expect a more balanced attack from the Cougars offense rather than the pass heavy offense from last season. The Cougars feel confident with their size upfront and believe they should be able to move the ball effectively on the ground. That being said, they should not run the ball as often as 2018 with Mason Ferrara. Another wrinkle in the offensive scheme will be sophomore Matt Meacham, who will play at least one or two series in some of HF-L’s games. A new rule allows athletes to play in JV games after a two days rest and not playing more than ten snaps during the Varsity game. Defensively, the Cougars will continue their physical style of play. During their five regular season games last Spring, HF-L shut out two opponents and allowed a total of 16 points. The defense should also benefit from the return of the Cougar Freight Train (student fan section) to the stands.

The path to repeat as Sectional Champions may be a bit easier this season, mostly because the playoff structure has returned to pre-pandemic rules. Eight teams, rather than last year’s four, will make the Sectional tournament. Last year’s success doesn’t guarantee anything this season and the Cougars will have to earn their right to defend their throne. 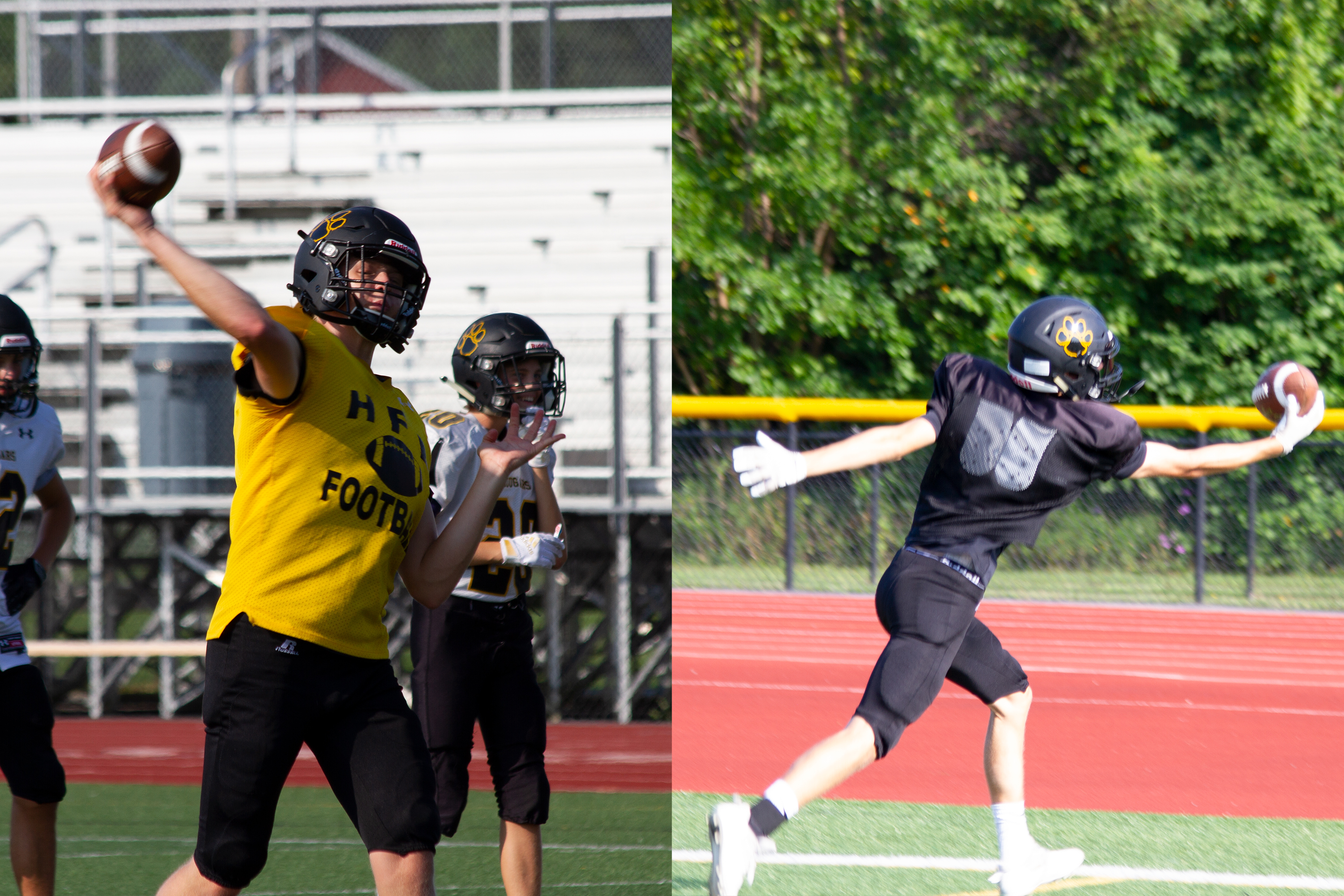 Senior quarterback Brody Young zips a pass to one of his wide receivers, who snagged the ball with one hand in the back of the end zone. Photo Credit: Peter Carosa