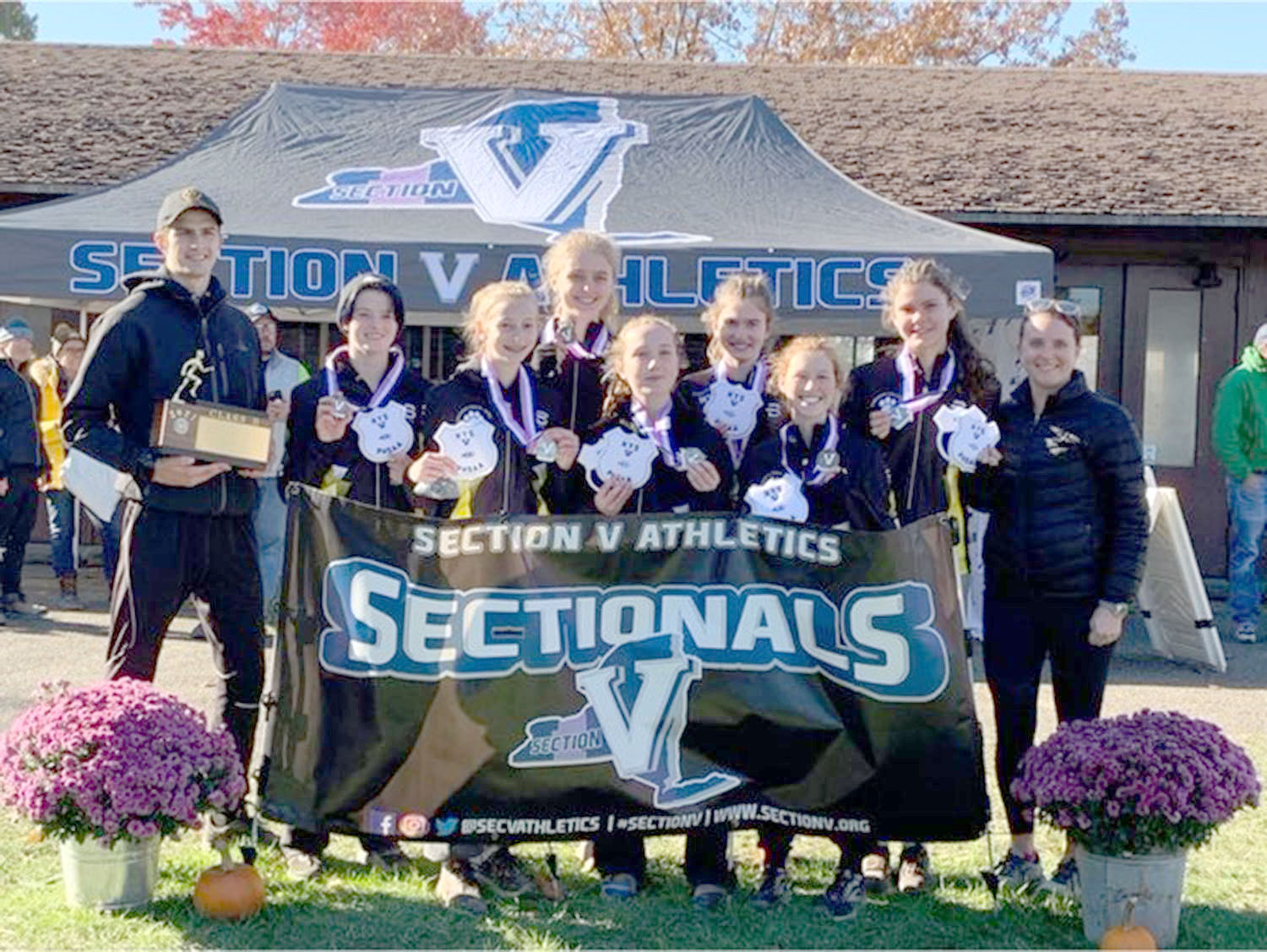 HF-L accumulated 43 points to win the Class B crown, beating runnerup Pittsford Mendon by 12 points and third-place Pittsford Sutherland by 19 points in the 14-school field on November 6. Ann Brennan was the Section V Class B individual champion as she completed the 5-kilometer course at Letchworth in 19 minutes, 29.5 seconds which was 27 seconds faster than the second-place runner. Paige Kidd was third at 20:07.2 and Alia Spaker fourth in 20 minutes, 9.9 seconds.

“Ann was right in front at the start and Alia was second to her through the first couple of miles,” said coach Nolan Hoh, who was named the Section V Class B Girls Cross Country Coach of the Year in his first year since taking over the reins from legendary coach Bernie Gardner. “Alia then dropped back a bit as a girl from Sutherland and Paige passed her. Ann is a smart, veteran racer and is the 12th HF-L runner to win an individual sectional title in cross country. She ran the pace that she wanted to and Paige and Alia ran well.”
The other four runners also contributed heavily to the victory.

“Teagan and Oli formed another little pack,” Hoh said. “Teagan ran a good race, posting about the same time as she did in our last league race, and Oli had an amazing race. Ginny had a strong run and Kate was originally going to be an alternate but handled the opportunity beautifully. The girls had been doing a lot of work on a finishing kick in the last 200-400 meters in the last couple of weeks and they all went into another gear in the last 400 meters of the race. We are very excited to win sectionals. We thought it was possible to have three runners among the top 5 to 10 runners in the race and the other girls also did their jobs. It was a nail-biter of a race to watch in real time though because it is impossible to know how the scores were working out.”

“Ken was disappointed in the finish as he is a senior,” Hoh said. “The rest of the guys are young (five sophomores and a freshman) and were excited to be running and psyched for the total experience. Our expectations of winning were hopeful but we were also realistic about our chances. Overall, I was happy with how the boys ran. Drew ran a good race as a freshman and Ken finished his high school career with a nice time. Riley, Henry, Amer, Calvin and Matthew turned in very good times for such a bunch of young runners. There was only two minutes between our first runner finishing and our last runner finishing; that is fantastic and we can build on that.”

Hoh said he did not think the course at Letchworth was a problem. The terrain was very flat with no hills whatsoever. It also wasn’t very muddy which was surprising given the amount of rain that the area had leading up to the race. While the course at Letchworth State Park was a new venue for the Section V Championships, Hoh said the Cougars did have a chance to have some workouts on it during the season but admitted that did not compare to actually running the course in a championship race.

HF-L’s girls will compete in the New York State Public High School Athletic Association Class B Championship at 9 a.m. on November 13 at Chenango Valley State Park, which is near Binghamton. Ironically, it is also the very course where the Lady Cougars won their last state title, in 2004.