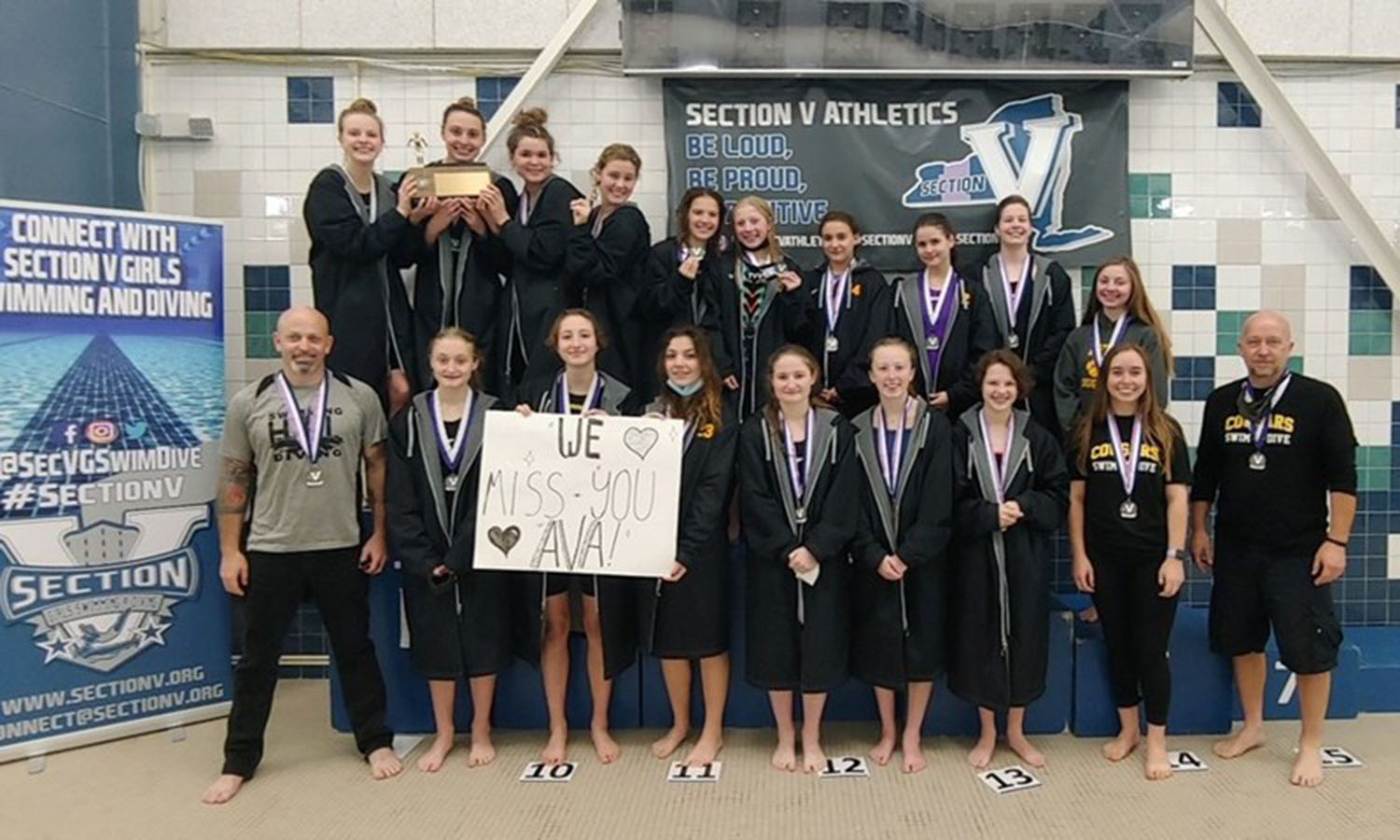 It has been a wait of five years, but the Honeoye Falls-Lima Girls Varsity Swim team can add to their banner in the high school gymnasium after winning the Section V Class B title in dominating fashion last week.

HF-L swam away from the pack, racking up 471.5 points, over 100 points more than runnerup Spencerport at the Section V Class B Championships on November 6 at the Webster Aquatic Center. The Lady Cougars captured first place in nine of the events during a dominating performance.

“It all started with a very good performance in the preliminaries on Wednesday (November 3),” said HF-L coach Ari Freedman-Weiss, who was named Class B Coach of the Year. “As the season went along it looked like we would be the team to beat in sectionals and the times on the prelim sheets going in showed that we should run away with it. The girls worked hard and made sure we got it done.”

The divers gave HF-L a good start as Jenna Bovenzi compiled 331.50 points for third place and Bethany Coler totaled 320.45 points for fifth at the Class B diving event on October 29 at Churchville-Chili. Their places gave the Cougars 30 points and a 10-point lead over both Spencerport and Gates Chili before the swimming events were even held.

“Jenna has worked hard and we felt she could place in the top five,” Freedman-Weiss said. “Bethany progressed very quickly this season and we thought it would be a possibility that she could also be among the top five divers.”

Following the strong showing at the swim preliminaries, the Cougars began the Class B finals with a victory in the opening event as the quartet of Isabelle Dague, Emma Kidd, Emily LeFrois-Heath and Kathryn McRae teamed for a time of 1 minute, 53.70 seconds (almost two seconds faster than the 1:55.67 that the group turned in the prelims). Adeline Beutner took third in the 200 freestyle at 2:02.79, nearly three seconds faster than her 2:05.38 in the prelims. Teammates Samantha Picciotti took fourth (2:04.70) and Addison Boggio eighth (2:09.53, beating her 2:11.09 from prelims). LeFrois-Heath won the 200 individual medley in 2 minutes, 11.86 seconds, a state meet qualifying time. Ella Beutner came in seventh (2:31.93) and Hazel Jokl ninth (2:34.84, faster than her 2:38.49 from prelims).

“We kind of expected Emily to qualify for the state meet in that event, but it was still great to see her do so,” Freedman-Weiss said of the senior who was named the Outstanding Swimmer of the Meet and also the Monroe County Division 3 Swimmer of the Year.

“The 200 free relay making states was also a highlight of the meet,” Freedman-Weiss said. “They were only .15 seconds off the qualifying time in the prelims so we knew they had a good shot at making it. Emma Kidd winning the 100 breaststroke was also a highlight as she was not expected or favored to win the event before she turned that great time in prelims.”

LeFrois-Heath will compete in both the 200 IM and the 100 butterfly and will team with McRae, Tanner and Kidd in the 200 freestyle relay at the New York State Public High School Athletic Association Championships on November 19 and 20 at Ithaca College.