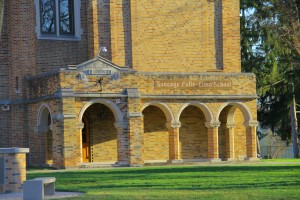 Consequences for those involved unfolding

BY DONNA MACKENZIE
Although it was reported in some media that the case of a school shooting threat at Honeoye Falls-Lima High School was closed, that is not entirely true.

Captain Paul DeLella, the Monroe County Zone B commander, stated this past Monday that while the case is completed on the sheriff’s part, it could be re-opened. The Sheriff’s Office began an investigation on April 25 after a school shooting threat was found scrawled on the wall of a boys bathroom in the old part of the high school that afternoon. The threat made reference to a potential shooting at the high school on April 27, leading to about 300 of the high school students being absent and another 500 students in grades K-8 also being kept home that day.

“The case is completed on our part,” DeLella said in a phone interview. “Although we do have a suspect, we do not have enough evidence to arrest them. That being said, the case could be reopened and an arrest made if enough evidence is brought forward.”

Asked if it was possible that the threat was a prank, DeLella said that whether the threat was just a teenage prank or not, the threat is a crime.
Because of the threat, all HF-L buildings were placed on lockout on April 27 with more deputies (including Sheriff Todd Baxter) at the high school and other district buildings and entry to the buildings was restricted.

When classes resumed May 1 following a previously scheduled Professional Development Day, attendance in the district was back up to about 95 percent of the students being in school. A statement posted on the district’s website on May 1 said that “The District has completed the school-related investigation and are following the Code of Conduct to deliver the appropriate consequences to those involved.”

During a phone interview with HF-L Superintendent Gene Mancuso this past Monday, Mancuso stated that he met with the Sheriff’s Office on Saturday (May 5) and he termed the sheriff’s investigation as being “on pause”.

The district is not bound by the same legal standard of proof as the police are and therefore, the district can apply consequences to those involved.

“I can tell you that those involved are not at school right now,” Mancuso said. “The consequences are complicated and the hearing process is still unfolding. Any disruption to learning is a serious offense and the event was a disruption to teaching and learning.”