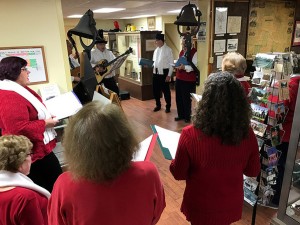 Festive carols were the order of the night at the Honeoye Falls-Mendon Historical Society Christmas Holiday Social two weeks ago as seen in the photos above and below. Submitted photos

Schoolmarm Miss Mary (Mary Lynne Parmelee) hosted the evening, filled with joyful Christmas caroling sing-alongs by Ann Mangan’s piano students; singing and guitar playing by Val Fowler; and a full set by the musicians and choir of St. Paul of the Cross Church. Hot Wassail and Christmas cookies were served to a constantly-rotating crowd of about 40 people.

The Historical Society’s Museum was open to the public during the event, where recently-discovered plats related to Rochester Junction and the Rochester & Honeoye Valley Railroad (predecessors to the Lehigh Valley Railroad) were on display.

The Society extends its appreciation to Lynne Menz who has served as Secretary for ten years. She has served as a docent in the Society’s Museum, has led tours of the Honeoye Falls cemetery for Manor School 4th Grade students and two years ago, she organized an afternoon tour and program for the community at the cemetery, at which several amateur actors ‘came to life’ as some notable occupants of the cemetery who told about their lives in Honeoye Falls.

The speakers and topics for the Society’s 2017 monthly program meetings are expected to be finished soon and will be available for download on www.hfmhistorical.org.