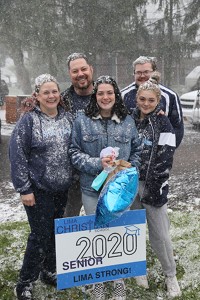 Senior Mariah McGuire front and center (played Miss Lark in Mary Poppins), parents Lorenne and Jason McGuire on the left, siblings Micah McGuire (a volunteer firefighter in Lima) and Kirsten McGuire, a sophomore at LCS, on the right. There was a snow squall at the end of the parade. Photo Credit: Lima Christian School

The Class of 2020 at Lima Christian School was recognized with yard signs and other gifts from its teachers and staff thanks to a car parade on Saturday, May 9. The day went well overall despite cold temperatures and weather vacillating between snow and sun.  Both the givers and the receivers were blessed, and tears were shed, as teachers and staff and students miss each other!

There were two groups of six-eight vehicles each, one covering areas mostly south, (Mt. Morris, Dansville, Canandaigua, Bloomfield, Honeoye Falls, Lima) and one mostly north, to Victor, Rush and Henrietta and as far as Greece. Yard signs and balloons were placed, and gifts were given including homemade masks made with custom “LCS Class of 2020” fabric, and homemade graduate cookies, both made with love by LCS staff.

Candygrams were also distributed to seniors and their siblings who had participated in the Mary Poppins play that was canceled the afternoon of their dress rehearsal on March 12, due to the pandemic. Thankfully the dress rehearsal was recorded by a last minute videographer who was able to drop everything and come record it.  This was played as a Facebook live event on May 1 for the school to rally behind the kids and see the results of months of hard work. It was very well done. It can still be seen through a link on the Lima Christian School Facebook page, or on youtube.
More photos will be in next week’s edition.