One wants to study criminal psychology because she is fascinated by how the mind works while another wants to study nursing in part thanks to inspiration from her grandmother, but Mariah McGuire and Georgia Gallatin are alike in pursuing academic excellence. It is the reason why McGuire and Gallatin earned the honor of being the valedictorian and salutatorian, respectively, of the Class of 2020 at Lima Christian School.

McGuire, the daughter of Lorenne and Jason McGuire of Lima, will be heading to Liberty University this fall to study criminal psychology. She also considered Cedarville University and Houghton College. McGuire held a 4.0 average despite taking some challenging courses such as Advanced Placement English Literature and Composition, a statistics class through Genesee Community College and English 101 through Roberts Wesleyan College.

Her involvement in school extended to clubs and activities such as National Honor Society for two years, the School Worship Team for four years and the Mentors for Minis program, which pairs a high school student with a student in the elementary grade level, for the past three years. In addition, McGuire served as the Class of 2020 President as a freshman, sophomore and junior. She was the Student Council President this year. As a freshman, she sang in the school choir.

Outside of school, McGuire was involved in the church youth group at 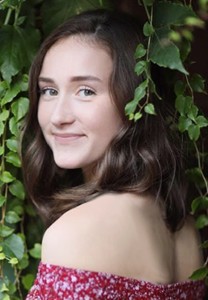 Lima Baptist Church for a couple of years.

McGuire, 18, received an English Department Award as a junior and as a senior.

A three-sport athlete at Lima Christian, McGuire played on the varsity soccer team all four years of high school. A co-captain as a senior last fall, McGuire was a starter on defense but also showed an ability to score as she recorded two goals. Showing her versatility and adaptability, she moved to goalie for the final five games of the year and picked up 53 saves. McGuire was named an All-League 1st team selection in both her junior and senior years. She played for the varsity basketball team for three seasons. A co-captain as a senior, she was a starting forward and scored 118 points (6.2 points a game), which was fourth-highest on the team. McGuire earned All-League 1st team honors as a junior and as a senior in the sport. She also played varsity softball and this spring would’ve marked her fourth year on the varsity. A co-captain as a sophomore, McGuire was one of the reasons why the Lady Saints earned their first #1 seed in the sport in 2019 en route to advancing to the semifinal round of the Section V Class D Tournament. She picked up seven wins as a pitcher with 68 strikeouts and also contributed with the bat as she hit .471 (third-best on the team) with two doubles, one triple and one home run among her 22 hits. She was named to the Section V Class D All-Tournament team. She won’t play a sport at Liberty.

Her favorite memory of high school has been playing sports at the school because it is a great atmosphere and the camaraderie of the teams has been wonderful. Asked who would be among her favorite teachers, she said her Bible teacher Mr. Sanders.

“He is a really great teacher who took the time to understand us as a class,” she said. “He is authentic and forthright. He’d tailor his classes to us as students.”

While McGuire said she has missed being around her classmates, she said the pandemic has also taught her things.

“I really learned that it’s important to be alone at times,” she stated. “I also learned that life is unexpected and anything can happen at any time so you have to cherish memories when you make them.”

Gallatin, the daughter of Morgan and Jeff Gallatin of Bloomfield, will be attending Keuka College to major in nursing. She also considered St. John Fisher College. The salutatorian of the class, she held a 97/98 academic average while tackling such challenging courses as AP English Literature and Composition, a Psychology course through Finger Lakes Community College, a class in Statistics and a class in Physics through Genesee Community College and English 101 through Roberts Wesleyan College.

“I just have a passion for helping people and my grandmother worked as a nurse in the labor/delivery ward at a hospital in California,” she said.

In addition to academics, Gallatin has been involved in school activities such as National Honor Society, the Mentors for Minis program and serving as treasurer of the Class of 2020 as a sophomore.

Gallatin, 17, has also been active outside of school. She has been a camp counselor at Camp Hickory Hills and has been a dancer and taught dance classes at Studio for the Performing Arts in Newark. She has served at her church, the Calvary Church of the Finger Lakes, by helping at the welcome desk and signing kids in for Sunday School. She also went on a mission trip to Guatemala her sophomore year.

Gallatin has earned an award for her academic excellence in history.

A three-year member of the varsity basketball team at Lima Christian School, Gallatin was a forward on the team this past winter and scored 130 points (6.5 points per game), which was third-highest on the team. She doesn’t intend to play a sport in college.

While her favorite memory from the past four years is hanging out in the Art Room, drawing and talking with friends as a relaxing way to be away from academic stresses, Gallatin said her favorite teacher has been Mrs. Wendlandt.

“She helped not just with English class but with all my classes,” Gallatin said. “She has also taught me life lessons that will help me well beyond my school years.”

Gallatin said what she has missed the most over the past three months since school was closed due to COVID-19 has been the accessability of her teachers, talking with them face-to-face and not just in the virtual realm. She said that the situation has also taught her to cherish every moment.

“When you are a freshman, you just want high school to go by fast,” she said. “Now that we are seniors and have had so many things that would’ve been wonderful memories taken away, I wish I had cherished the time spent in my freshman, sophomore and junior years more.”