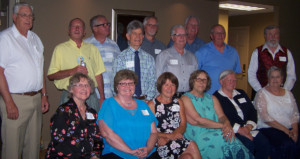 The year 1969 saw many things, perhaps none greater than humans landing on the moon, but in Lima, it was the last year of a graduating class from Lima High School. When the members of the Lima High Class of 1969 received their diplomas in June 1969, it was the ending of one era and the beginning of another. In September 1969, the Indians of Lima High and the Hornets of Honeoye Falls High merged together to become the Cougars of Honeoye Falls-Lima High. 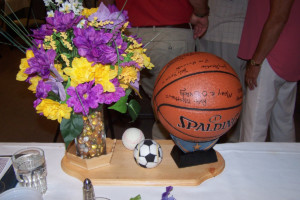 This was the gift from the Lima High School Class of 1969 to retired coach, teacher and athletic director Tom Moon. Photo by Donna MacKenzie

After welcoming remarks by Rawlins (the class of 1969’s vice president), Hegeman recognized all the veterans of his class, noting that 16 percent of the class served in one of the branches of the armed services. He then recognized military veterans of all the classes and Armed Forces Medley was played. The music was provided by Premier Entertainment NY, Inc. and its owners Joseph W. Lynch and Jonathan Stills. After the Armed Forces Medley, Hegeman also noted the sacrifices made by spouses of veterans and asked the spouses to stand and be recognized. Following an invocation by Wolf, a buffet dinner was served to the over 140 people attending the banquet.

Following dinner, the members of the class introduced themselves and told a bit about their lives in the 50 years since graduation. Hegeman introduced Tom Moon, who was a teacher and coach at the school and the person to whom the class had dedicated its yearbook and this year’s banquet. On behalf of the class, Hegeman presented Moon with a gift from the class, a wooden stand on which was mounted a basketball, a miniature soccer ball and a baseball (recognition of the sports that Moon coached at Lima) and a vase full of flowers. Moon, who was brought to the banquet in a vintage car, thanked the class for the gift and the rest of the attendees as well. 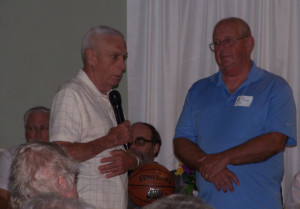 Retired Lima High coach, teacher and athletic director Tom Moon (left) thanks the class of 1969 and those attending the banquet for the gift. Lima High Class of 1969 member John Hegeman, who made the presentation to Moon is on the right. Photo by Donna MacKenzie

Those alumni from all the classes who had passed away since the reunion in July 2018 were remembered by Rawlins. After that a roll call of the classes was conducted with each of the 88 alumni present recognized by Teresa Roykouff Peterson. Sharon Neenan (Lima Class of 1965) made a presentation about the HF-L Alumni Hall of Fame and read the names of those Lima High alumni who have been inducted into the Hall of Fame. Following a brief business report on the Alumni Association and a 50/50 drawing, everyone present sang the school’s Alma Mater and God Bless America. The talk, laughter and music (thanks to disc jockeys Lynch and Stills) continued afterward.

Although the class of 1969 is the last class to be recognized for its 50th anniversary, the Lima Alumni Association will hold the banquet next year and committee members are taking suggestions for how to organize the banquet, so save the date of Saturday, July 11, 2020.