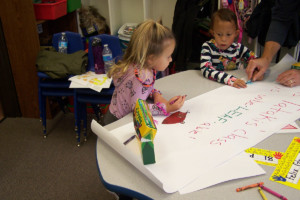 The students at Lima Primary School look forward every year to the Maker Faire in October and this year there was no shortage of things to learn and do last Friday.

Kindergartners and first-graders had several different activities in the school’s four rooms on the second floor. There was fun with LEGOS, book-making, balloon sculptures, yoga, mosaic tiles and PVC lights. On the first floor, students could partake of Drama Kids’ fun, a popsicle stick catapult and making marshmallow toothpick structures. Instead of building things, the students could take apart items in another classroom. Science Projects were made in another room. There was also face painting, a medical clinic in the library, Snap Circuits, a Fall Art station in the art room and making playdough. High School student volunteers showed off work with Robotics in another room. 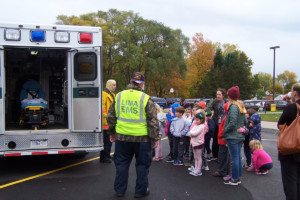 A group of students from one of the classes at Lima Primary School gathers around the Lima Ambulance during the Maker Faire at the school last Friday. Photo by Donna MacKenzie

There was a 911 demonstration and a food demonstration in a classroom. Students could have fun with a marble maze in one of the classrooms. In the morning, students could learn about Raptors and also took tours through a fire truck from the Lima Fire Department and an ambulance from the Lima Ambulance Corps. Also outside in the morning was a Mounted Patrol Horse Unit from the Sheriff’s Department. In the gym, students could work with Soma Blocks and there was also a photo booth. The children could participate in leaf imprinting or making pipe cleaner constellations or making skeleton crafts. There was also a greenhouse project. Lima Primary students are used to Dance Party Fridays, but this time the Dance Party Friday fun was a big different as it was held in one of the classrooms.

The Maker Faire is made possible through the volunteer efforts of several adults in the community and students from the high school.