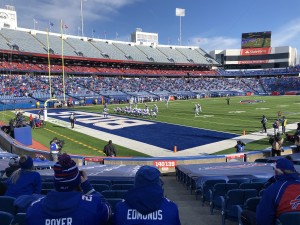 The Buffalo Bills stamped their ticket to a home playoff game in Orchard Park on December 19th, 2020 following a 48-19 victory over the Denver Broncos. Our journey to that playoff game (the first Bills home playoff game since 1995) began on New Year’s Day. Well actually, the journey began roughly 31 hours before the first day of 2021, when we were informed by the Bills Ticket Office that we would have the opportunity to purchase tickets to the Buffalo Bills Wildcard game (time and date TBD). They assigned us the time of 10:30 AM on 1/1/21 to purchase tickets, if there were any left. On that Friday as soon as the clock read 10:30:00 AM on our computer, we logged into Ticketmaster and quickly tried to survey the website to determine what tickets remained. The slow and buggy website combined with the PTSD of dozens of failed attempts to purchase a PS5 online, made our hearts race. Unfortunately, all of the four ticket pods had sold out by our time, but we were able to secure two tickets near the “front” row in the east corner of the north endzone. It was decided, based on Covid-19 risk and availability, that my cousin, Sam, and I would be two lucky Carosas to attend the game. So, our tickets to the game were stamped; the hardest part was over, or so we thought…

Two days after purchasing the tickets, we got to relax and watch the Buffalo Bills secure the number two seed in the AFC by steamrolling the Miami Dolphins. That night we learned the Buffalo Bills would be hosting the Indianapolis Colts on Saturday, January 9th, 2021 at 1:05 PM.

In order to attend the game, the Buffalo Bills and the New York State Department of Health (DOH) required a negative Covid-19 test. All tests would be administered by the NFL’s testing partner at Bills Stadium two or three days before the game.

On Monday, January 4th, we scheduled our Covid-19 tests for the Wednesday before the game. So, Wednesday after work we drove to Orchard Park for our Covid-19 tests. The drive-thru test consisted of a 10-second swabbing in each nostril, not the test that feels like the swab touches your brain. There was no wait between when we drove into the parking lot and the test; the entire thing took no more than 15 minutes. Then, came the waiting game.

We were told we could expect the results in 24 hours. Thursday morning, we saw on Twitter people had received their results overnight, meaning a turnaround time of approximately 18 hours. Twenty-six hours after our tests, we received a PDF that Covid-19 was not detected.

Saturday morning, we made the drive to south Buffalo. With the parking fee being included in the ticket price, we parked at one of the stadium-owned lots. But first, we stopped at the nearby Wegmans for a pregame meal. We ate our sushi (the sub line was a mile long) in the Wegmans parking lot, because with tailgating banned, we were not sure if we could eat it at the game.

Once parked at the stadium, we donned our cold weather gear (remember this) with the temperature expected to be in the thirties. We make the 15-minute walk to our gate. In order to maintain social distancing, each ticket had a unique entry time and gate based on seat location.

We were moments from getting our tickets scanned and now we were out of the line. While Sam was getting his forehead temperature scanned, I stood with the gentlemen who checked our paperwork. Now remember, we were wearing winter gear, had just walked a half mile, and it was an unusually sunny January day (Sam was wearing a black winter hat), so not surprisingly his head would be a little hot.

After a few minutes, I walked over to Sam and the NYS DOH officials and NYS Police who could not get the forehead scanner to work. The scanner kept reading “LO.” Apparently, these things were not made to work in Buffalo winters.

They had to make an announcement over the loud speaker, asking if there wearing any spare scanners at other gates. Within minutes, we had a new scanner and a normal temperature reading from Sam’s forehead, so we were cleared for entry.

As we walked back through, everyone was relieved, especially the gentlemen who I initially waited alongside with. Security checked us again, we got our tickets scanned, and now we finally made it in the stadium.

Strolling through the concourse, we noticed something was off. The speakers were blaring artificial crowd noise. We quickly found our seats; we were some of the first fans into the stadium. Only the special teams’ players were on the field warming up, yet they were still pumping in crowd noise. 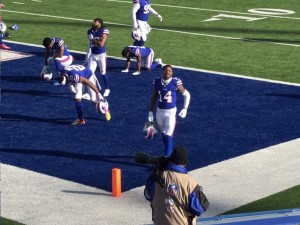 After a while, still before the rest of the teams came out to stretch, we heard the “real” crowd start to get loud. Stefon Diggs, the Bills’ big offseason acquisition who had yet to meet Bills Mafia in person, runs out of the tunnel towards our corner of the north endzone. Diggs throws a football back and forth to a handful of fans in our vicinity. Just as quickly as Diggs had ran out, he was back in the tunnel towards the locker room.

Fast forward past the warm-ups, player introductions, and national anthem. The Bills were kicking off to start the game. The stadium was blasting Seven Nation Army by The White Stripes with the crowd singing along as Buffalo rookie kicker Tyler Bass put the ball on the tee. Everything seemed to be right in the world; despite there being only 6,772 fans, the crowd was very loud.

I’m assuming most of you reading this watched the game, so I’ll spare you the details. I think I speak for a lot of people when I say it’s hard to not think of these Bills as the same old Bills of the last twenty-plus years. The Bills had some quick three-and-outs resulting in punts and good starting field positions for the Colts. The crowd was certainly nervous, but rightfully so, when was the last time the Bills were in this position?

The turning point was when Bills legend, now Colts head coach, Frank Reich, elected to go for it on 4th & Goal. Philips Rivers’ pass sailed past the out-stretched finger tips of his receiver. The Buffalo Bills offense promptly drove down the field with Josh Allen scoring a short rushing touchdown with seconds remaining in the first half.

The Bills scored a field goal to start the second half and later Allen throw a dime to Diggs in the endzone. But as the fourth quarter progressed, the crowd began to grow uneasy remembering the comeback king was the opposing head coach. Just like the millions of Bills fans watching from home, every single one of us in the stands was experiencing an elevated heartrate. Unlike the fans at home, the crowd could not pace in order to maintain social distancing.

Indianapolis was driving down the field, albeit without any timeouts, but then the unthinkable happens. The Bills strip the ball from Zach Pascal (who was taunting fans during the pregame) and the game is over. Except, remember this is a Buffalo Bills Wildcard game. We cannot end the game without the officials blowing a replay call. À la “The Immaculate Deception,” the referees do not reverse the call on the field of Pascal being touched while his knee was down.

The game of course comes down to the last play with Rivers attempting a Hail Mary pass. The 2020 Buffalo Bills have been here before, only this time have learned from their past mistakes. Bills Safety Micah Hyde swatted the ball down to win the game. 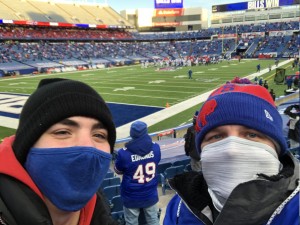 The crowd went crazy. The Bills went crazy and stormed the field. Grown men were crying after waiting 25 years for this moment. The place was in a frenzy as the ushers tried to dismiss the crowd like it was a Sunday service.

During the walk to the parking lot, there was nonstop cheering and many “Hey-ayyyyyyy-ayyyyyyyy-ayy” chants. Everyone was so happy and friendly that people were letting each other cut in front of them as cars lined up to leave the stadium parking lot.

It truly is a new era in Bills history and it feels good.