Murder & Mayhem with the Masons in Lima

Home Murder & Mayhem with the Masons in Lima

BY DEB AND TIM SMITH
RESET ~ We left you last week in the midst of sharing some never-before-published information on a murder with possible Lima connections. Our source for the information was Michael T. Keene, a noted author, film producer and radio show host whose credentials are readily available online.

The murder in question is that of William Morgan who, in response to the Anti-Masonic book he has written, is abducted by the Masons in 1826 and in all likelihood murdered. But there are lingering rumors that Morgan has not been killed, but relocated, perhaps to Lima.

In pursuit of his investigation of this story, Keene asked then current Lima Masons if they would allow him access to their oldest records. He was surprised to find himself walked down multiple hallways to an inner sanctum of the lodge. Here he discovered a story we’ll let him share in his own words.

The book includes much of the information that Keene already knew along with one interesting addition. The final bit of information is the mention of an 1827 sighting of Morgan at a specific house in Lima. Which house was it? After having read the Masons’ documents, here are the directions, according to Keene, in his own words…

Head east on 5&20 about two miles. It’s on the left side on the corner where the blinking light is. It’s the house where the attic window is boarded up (the exact window where Morgan was sighted!)

For the record, this would be the house on the northwest corner of the intersection where Bragg Street comes to a “T” with 5 & 20. The window is still boarded up to this day. Cue up the Twilight Zone theme song.

LIMA VERSION ~ So in the alternate version of the William Morgan tale that we will refer to as the “Lima version” we have the Masons buying Morgan’s silence by affording the opportunity for him to live out the rest of his life under an assumed identity laying low in Lima. The personal problems that seemed to be closing in on Morgan as described last week would add to the feasibility of the Lima theory. If he simply wanted to extricate himself from his Batavia brouhaha where better than Lima to do it? 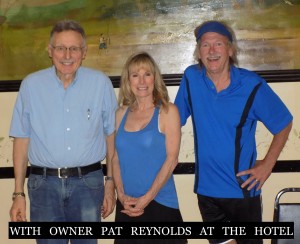 As is the case with most classic tales of Lima lore, we have an American Hotel connection coming up for you. Lima was a stagecoach stop between Canandaigua and Batavia, the two primary settings of our story. In the prevailing theory that Morgan was taken to Erie County and drowned in the Niagara River, the primary stagecoach route would have passed through both Lima and Batavia.

Regarding the American Hotel connection, Michael T. Keene knows the owners, Pat and Rose Reynolds and part of his documentary film Visions was filmed at the Hotel with the Reynolds confirming the fact that rumors about Morgan living in Lima had been passed down through the generations in town.

COAT CALAMITY ~ All of this being said, we’ve saved the most intriguing thread of the Lima/Mason/Morgan story for last. The Lima Freemasons held their meetings at the American Hotel. As one winter meeting was in session in 1848, someone stole all of the men’s coats.

Surprisingly, a few weeks later, the coats were all returned, left at the front door of the Hotel neatly stacked and topped with a note of apology. Turns out the apology was flagrantly facetious. All of the coats had been infected with smallpox. A Rochester Democrat & Chronicle article reported that “all but one of the Masons who recovered their overcoats that night came down with that dreaded contagion.”

Of the infected Masons, one would die of the disease. Yes, we have a confirmed case of pernicious people not playing nice in Lima. In corresponding with Keene, he shared the following with us regarding his personal experience in Lima. Keene told us that, “Incredibly, Jim Kirkwood who owned Kirkwood Oil, showed me a tombstone that was erected to commemorate that Mason who died. It’s on the south side of Route 5 & 20 as you are heading west out of town. An independent confirmation of the entire story!”

MORGAN’S REVENGE? ~ And doesn’t that throw out a tantalizing tease to the Morgan-went-to-Lima theory? Maybe he did make the Masons pay after all. Or perhaps someone committed the crime in his honor. We’ll never know.

WHAT’S THE SCOOP ON THE MASONS? ~ All of this talk about Freemasonry and how it related to the murder of William Morgan piqued our curiosity about what in general this organization was all about. We had to admit we didn’t personally have a very good grip on it and we’re thinking that maybe some of you don’t either. So we did a little research and came up with the following version of “Deb & Smitty Do the Freemasons in a Nutshell.”

The Secret Fraternal Order of Free and Accepted Masons is the world’s oldest and largest secret fraternity. To clarify, the terms “Freemason” and “Mason” are interchangeable. Freemasonry evolved from the guilds of stonemasons and cathedral builders of the Middle Ages. So originally the “mason” term did literally apply to the job, but when the cathedrals and castles were all pretty much built, then recruitment spread to all occupations in order to sustain membership.

The roots were in Western Europe and primarily in England. The first official chapter was christened in London in 1717. It was spread throughout the world as the British Empire spread. Its greatest popularity today is in the British Isles and other countries originally within the British Empire which would explain how the organization established an early foothold in the United States.

RELIGIOUS RITES ~ Masonry is sometimes thought to be a Christian organization, but it is not. Some of the tenets of Masonry include morality, charity and lawfulness, which fall in line with most religious beliefs, but because some of their ceremonial rituals bear the rites and trappings of religious orders, the Masons have occasionally come in conflict with some organized religions, most notably the Roman Catholic Church.

As a matter of fact, after their formation in 1717 it took the Masons just two decades to actually piss off the Pope. In 1738 Pope Clement XII issued the Catholic Church’s first decree against Freemasonry, and it still applies today. Some people just can’t let go of a grudge. That being said, it is true that Masonry membership has traditionally been drawn largely from the white Protestant population and charges have been levied of Masonic prejudice against non-whites, Catholics and Jews.

Certainly the most surprising thing we learned in composing this piece is that in the decades-old history of the Masons, the worst thing that ever happened to the organization occurred right here in the Rochester area. When Batavia resident William Morgan published his anti-Mason exposé, he was abducted in Canandaigua, and in all likelihood, murdered by the Masons. The collective national response to this was that the first major political third party was formed under the banner of the Anti-Masonic Party.

PUBLIC OPINION ~ About the American attitude at the time, the New York Post wrote, “If good government is to be restored, all Masons must be purged from public office.” Over the ensuing decades, however, there was a gradual fading of the outrage. The Anti-Masonic Party morphed into the Whig Party but some of the damage could never be undone.

Rich with symbols and ritual, Masonry is a savory source of legends, parodies, and conspiracy theories. Regarding the conspiracy theories, we thought a CBS News This Morning segment, which is viewable online, summed it up best. They said that negative perceptions of the Masons were based upon the notion that the organization had established a reputation as a “Good old boy network” where members in prominent positions would use their power to unfairly favor fellow Masons in legal and political situations.

On the topic of parodies, here’s our favorite. In a 1995 episode of The Simpsons, Homer manages to make his way into a meeting of the “Springfield Stonecutters.” As the meeting makes its way into a celebratory sing-along soiree, a long rectangular table with dozens of fervent Freemasons find themselves frivolously frolicking through a rousing rendition of, “Who controls the British Crown? Who keeps the metric system down? We do, we do!”

So where are we at with the modern-day Masons? On the upside, worldwide membership exceeds 3 million with almost a million in the United States. And there are some famous modern-day Masons which we will cover next week.

But some of the glam seems to have faded. While 14 of the first 38 U.S. presidents were Masons, there has been none since Gerald Ford. And while there are still almost a million Masons in the U.S., compare that to 1959 when there were 4 million. That’s a fairly precipitous decline in a 60-year period. We’ll be back with our Mason finale next week and we’ve even written a poem called “The Masons Honor Roll Call” saluting the 75 most famous Masons in history!