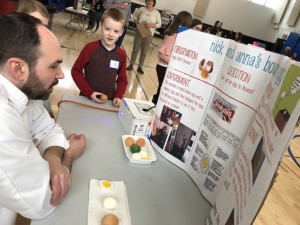 T. J. Connor Principal Dan Murray listens as Nick proves how he was able to prove an egg can bounce. Submitted photo

Thirty Wheatland-Chili kindergarten through fifth-grade students participated in the Fourth Annual T. J. Connor Science Fair. Elementary students used the Scientific Method to present their ideas to the judges. The Scientific Method consists of: Question, Hypothesis, Materials, Procedure, Observation, and Conclusion. The students had to also cite their sources. Cindy Dawson served as a judge together with University of Rochester STEM Initiative students Adam Luk, Nandini Samanta, Christina Liu, and Jacob Schmidt. The Science Fair is organized and hosted by the Wheatland-Chili PTA.

Thank you to parents Lisa Bates, Lisa Hitchings, and Shanna Fraser for their leadership, and parent Jamie Lange for decorating and creating the gift bags. Thank you to the Wheatland-Chili Federation of Teachers (WCFT) volunteers, the WC Sports Boosters volunteers, and Principal/Chef Dan Murray for the delicious breakfast.