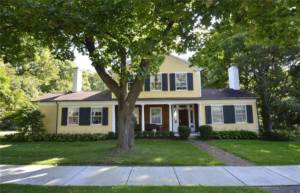 Photo courtesy of RE/MAX Plus.

BY JENNIFER CROWLEY
An historical home junkie with an eye for detail would probably notice that No. 12 Rochester Street, the yellow colonial at the south end of the picturesque street, is the only home featuring a recessed front porch (in fairness, first the person would probably note that the home is currently for sale).

While the main home (as opposed to the relatively new rear carriage house) might look a lot different today than it did in the early 1820s when there was only a very small house on the site (now the rear part of the residence), it actually looks much like it did only a decade later.

Yes the documented history of the home starts in the 1830s when Jonathan P. Sill, a Main Street merchant, acquired the property. When Sill married Miriam Colt in 1836, the bride’s father, a Wheatland farmer named John Colt, gave them two gifts that have lasted lifetimes: he had an addition built onto the home (the front part with the porch) and also provided many black walnut trees from a grove on his farm for use in the new construction. Colt also used the lumber in constructing his own home on Scottsville Road, which later became known as the Mortimer Cox house.

“The black walnut wood was used to create the façade of three rooms along the front of 12 Rochester Street. Each room also has black walnut trim on its doors, windows, and mantle. The inset porch was also constructed with the wood from John Colt’s farm,” offered Scottsville’s premier history keeper, Richard King LeRoy.

Sill eventually gave up his career as a merchant and took up farming in Chili. He remained active in the Scottsville Presbyterian Church and was a ruling elder at one time. The father of three was felled by bronchitis in his 40s; he died in 1855 after a blood vessel in his lungs ruptured.

The next owner of the home was William H. Hanford, Jr. (1819-1903). In addition to being the father of six children, Hanford ran the village grist-mill for a period of time. It was during the Hanford’s residence at No. 12 Rochester that the home’s most historical event of interest occurred. According to Mr. LeRoy, in the later years of the 19th century, one David Kellogg Cartter, Jr., husband to Nancy Haynes Hanford (sister to William introduced above), once “summered” in the home. Cartter, a lawyer that had studied in Rochester, was at one time a United States Congressman. After serving as a delegate to the 1860 Republican National Convention, which nominated Abraham Lincoln, Cartter was named as a diplomat to Bolivia.  On March 10, 1863, President Lincoln nominated Cartter as Chief Justice of the Supreme Court of the District of Columbia (later named the United States District Court for the District of Columbia). Finding the summer heat of Washington, DC to be oppressive, Justice Cartter and his family stayed at No. 12 Rochester to enjoy a more reasonable summer climate.

It is widely believed that Cartter’s stay was what prompted Hanford to add second story wings to the home during the 1880s. These wings were subsequently removed during 1956 by an owner named Arthur Robson. This renovation restored the home to its “post Colonial” appearance. In other words, a strong resemblance to the days when the Sill family was living there.

The Robson family lived in the house for ten more years after undertaking the restoration project that gave the home the look it has today. Over the past 50 years, the home changed hands at least five more times. The carriage house was built on the property in 2000. This building features cathedral ceilings, hardwood floors and is suitable for private office usage. The main home features a Greek Revival floorplan as well as a two-story foyer, music room, four woodburning fireplaces, a baronial-style leaded glass window, gardens, and a pergola. The listing price of this property, which boasts “correct architectural integrity,” a 1.3 acre lot, and close proximity to all of the charm Scottsville offers, is $475,000.