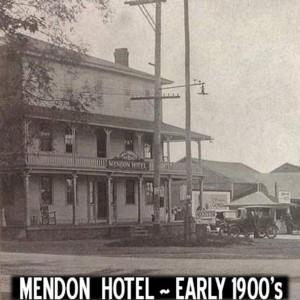 BY SKYLER, DEB & TIM SMITH
RECAP ~ Last week we visited Crosby’s gas station and mini-mart at the 4-corners of Mendon. I was in the middle of sharing the historical background on that property which was the site of the Mendon Hotel from 1812-1957. Intriguingly, from the 1820’s through the 1930’s, the Mendon Hotel was one of western New York’s most elite and elegant establishments.

Case in point . . . when American Revolutionary War hero, Frenchman Marquis de Lafayette, made his final tour of the U.S. in 1825 his itinerary included at least one stop in all 24 of the existing states at that time. The final leg of his tour had him crossing from Ohio through western New York on his sojourn back to New York City to board the ship upon which he would return to France. How about this feather in the cap of local history . . . the chosen site for Lafayette’s western New York reception and dinner was the Mendon Hotel.

MENDON HOTEL ~ But in the circle of life change is inevitable, and when the advent of the automobile brought an end to the era of stage coaches and passenger train service to the hamlet, the writing was on the wall for the venerable Mendon Hotel. After closing its doors for good in 1945, the three-story hotel loomed large and lonely on the hamlet horizon for another dozen years.
While people passing through Mendon were no longer looking for hotel rooms, what they did need however was gas for those new cars. In 1957 Gulf Oil purchased the property and after the Mendon Fire Department supervised a controlled burn to raze the old building, the 4-corners was blessed with a new gas station. Since then a series of owners and renovations has led us to the first store I ever got to walk to as a kid, Crosby’s mini-mart.

While I’ve become older and wiser during the time I’ve been working on my series for the Sentinel, I have also gained a new perspective on the whole history of my community. Two years ago this never would had occurred to me, but now every time I walk to Crosby’s the following thought crosses my mind, “Right now I could be stepping upon the same earth that Lafayette traversed almost 200 years ago.” Makes a man humble.

MARKUS TATTOO ~ Next week, I’m heading to Markus Tattoo. As I continue to push the envelope in my writing prowess, my teaser for next week’s piece is that it will consist of my first poem. Improving upon Shakespeare’s sonnet rhyme scheme, I’ve written a 12-line 3-stanza poem which accentuates the benefit of brevity. And let’s face it, even if you love Shakespeare you have to admit, sometimes the dude rambles on forever.

Personally speaking, I feel like I could have written the entire Romeo and Juliet balcony scene in under a hundred words. And that Hamlet suicide speech, if you’re just going to off yourself anyway, sometimes less is more. And of course the irony of that whole play is while Hamlet spends all his time deciding whether “to be or not to be”, somebody else does the job for him and kills him in the final scene.

Having delivered this week’s Shakespearean rant, allow me to return to my theme on the benefits of brevity and share my poem with you. Hopefully you’ll return next week to read the whole Markus Tattoo story, but if you’re going out of town or something, here’s my short version of the whole article on the tattoo parlor. 12 lines, 24 words.

I promise to flesh this one out for you next week.