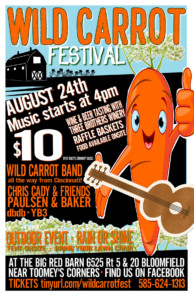 BY DEB AND TIM SMITH
What in the world is Wild Carrot? This one has an interesting answer and we are going to open this adventure by resorting to one of our audience participation activities to resolve the mystery.

We’ll stage this one in the form of a multiple-choice question. Here we go. Do you think Wild Carrot is:

The answer to our lead-off question would be E, which of course leaves us with some explaining to do. If you’d like to experience the explanation in person, you would have the opportunity to do so this Saturday, August 24 at the Wild Carrot Festival located at 6525 Rt. 5 & 20 in nearby Bloomfield.

If you’re familiar with this intersection which many people refer to as Toomey’s Corners, the festival occurs on the southeast corner. From our spot in beautiful downtown Mendon it’s only about a 15-minute drive. Admission is $10 adults ($12 at the door) and $6 for children and free parking is available across from the Outdoor Store.

For the past six years this family-friendly festival has been hosted at the 1800 farmhouse of Paul and Patty Hudson. Prior to this year the music was performed inside their huge 100-year-old barn and the event was billed as Big Red Barnfest. As the festival has expanded some appropriate changes will manifest themselves this year. For the first time, a huge outdoor tent will be in place to accommodate growing crowds as well as the possibility of rain or too much sun.

We’ll reveal the musical lineup momentarily but first please allow us to share some funky festival background. To date they have raised some $12,000 for local families and community family and youth programs which are administered through the West Bloomfield Congregational Church.

That church connection is actually downplayed because as Church Moderator Lisa Hochgraf told us regarding that connection, “We don’t say that very loudly because people think it won’t be any fun . . . but it is REALLY fun and it’s such a gorgeous setting.” Paul Hudson describes this setting as an expansive New York State wildflower preserve.

The new “Wild Carrot” rebranding signals the change as the organizers restage the event to help grow it. “Wild Carrot,” says Paul Hudson, “is a tip of the hat to the preponderance of Queen Anne’s lace (aka wild carrot) thriving on our 50 acres of woods and meadows. Besides, the name sounds a little wild and mischievous, far from a stuffy old church thing.”

Honeoye Falls resident Dave Mansfield, the owner of Three Brothers Winery on Seneca Lake hosts a free wine and beer tasting event. This is one church with an attitude you have to love.

As previously promised, we hereby present the performers at Wild Carrot ’19. If you had contemplated going to Woodstock ’19, for the 50th anniversary, but were disappointed that the whole shebang never materialized, here’s your best shot at reliving the experience not very far from home.

The band lineup is very cool: teleporting back those 50 years, to quote Ed Sullivan, “For all those youngsters in the audience,” the show kicks off at 4pm with YB3 (a local youth band). Next up will be Chris Cady & Friends, a scaled-down version of the Slipton Fell band, a staple at the Cottage Hotel in Mendon.

Around 5:30, festival namesake Wild Carrot will take the stage. They are a traditional folk and American music trio from Cincinnati. And, in a line that you won’t see listed on the resumé of many groups you can see perform in the area, these guys were actually named U.S. music ambassadors to Chile by the State Department.

Paulsen & Baker will take the stage around 6:45 and finishing off the evening, around 8:00, will be dbdb (aka dry bones dance band).

We would like to defer to Paul Hudson and quote him on some final lines about how this church-sponsored rock festival has blossomed to such successful fruition. “The whole rebranding process,” says Paul, “reflects the church’s culture and personality – open, affirming, fun, friendly, and a tad untamed.” As we stated above, this is a church you gotta love.