Appleton and Luo are Lima Christian’s valedictorian and salutatorian

Home Appleton and Luo are Lima Christian’s valedictorian and salutatorian 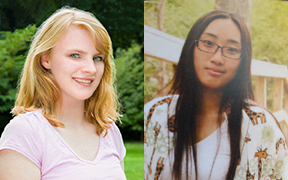 A passion for learning has been a hallmark for Catherine Appleton and Xinyan Luo at Lima Christian School so it is no wonder that Appleton is the Class of 2016 valedictorian and Luo is the school’s Class of 2016 salutatorian.

Appleton, the daughter of Karin and David Appleton of Bloomfield, is Lima Christian’s valedictorian with a 98.4 average. She will be attending State University of New York College at Geneseo to major in history and education. She also considered Brockport State.

“I started thinking about becoming a teacher when I was in fourth grade,” said Appleton, 17. “I have helped classmates with homework and I like it a lot.”

Thanks to some dual credit courses through Genesee Community College, Appleton has some experience with the academic rigor of college. She took Pre-Calculus, Statistics, English 101, Calculus 101 and 102 and Physics 101 and 102 through GCC.
Appleton was very active in school activities and clubs. She was a member of the school’s choir, the Drama Club, the Advanced Art Club, the school’s Book Club and is a member of the National Honor Society. She is also a Mentor for Mini at the school (which is like a Big Brother/Big Sister program).

Outside of school, Appleton has worked at a Flower City work camp and is a member of the Lima Baptist Church youth group. She is a cashier at the Big M in Bloomfield.

Appleton has earned several awards and honors over her years in high school. She recently received a department award for Bible Studies.

A three-year member of the varsity softball team, Appleton was a team captain this spring. She was the starting catcher for the Lady Saints and had three hits for the club. She does not expect to play softball in college, except maybe at the club level.
“My favorite memories of being here at Lima Christian are going on a mission trip to Mexico with many of my classmates and our senior trip to Boston,” she said. “I also loved our senior retreat. I have been with these classmates for nine years and have formed a lot of close friendships.”

Luo, whose host parents are Shari and Tom Allston of Lima, had a 90 grade point average. Luo is from Shanghai, China, and has attended Lima Christian School for three years. She will be attending Rochester Institute of Technology for computer science in the fall. She was a member of the National Honor Society, the yearbook staff, the Tech team and the bowling club. She has received a Merit Scholarship from RIT.