The second-grade students perform We Love the USA. Photo by Donna MacKenzie

The second-graders at Honeoye Falls-Lima’s Manor School presented “America…A Proud Nation” to celebrate Flag Day on June 14. The musical tribute to the country was presented to Manor School students during the day and then again at night for an appreciative audience of family and friends. 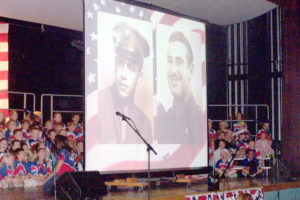 A slideshow of soldiers followed with many of the photos being of family members of second grade students. That was accompanied by all the second-graders singing “Thank You Soldiers”. All the students offered a “Taps Prologue” with quotes.

Students in Mr. Fallon’s class sang “America the Beautiful”. Students of Mrs. Erickson presented the song “Famous Americans.” The students in Mrs. Fleming’s class sang “Proud to be an American” also known as “God Bless the USA” which was made famous by singer Lee Greenwood.