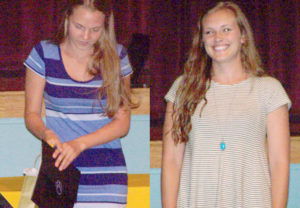 Bailey Reed (photo top left) and Carolyn Robb (photo top right) are named the valedictorian and salutatorian of the HF-L Class of 2016 at the HF-L Academic Awards night. Photos by Donna MacKenzie

Being on the cross country and lacrosse teams were two things that Honeoye Falls-Lima Class of 2016 members Bailey Reed and Carolyn Robb shared throughout their senior year. Now the two will have another as they were named the top two students of the class.

Reed, the daughter of Renee and Mark Reed, is HF-L’s valedictorian as she holds the highest grade point average in the senior class with a 99. She will be attending the University of Pennsylvania in the fall to major in marketing. She also considered Notre Dame and the University of Pittsburgh.

“The school is in a big city (Philadelphia) and it is close to home, but not too close,” Reed said. “I also feel it is a good fit for me academically.”

Reed didn’t shy away from taking a demanding academic courseload with eight Advanced Placement courses: AP European History, AP Biology, AP English Language and Composition, AP US History, AP Statistics, AP Calculus BC, AP Macroeconomics and AP English Literature and Composition. However, she also took care to take courses that nurtured her artistic talent and gave her enjoyment by taking at least one art class each year of high school.

Along with academics, Reed was very involved in the school. She was a member of National Honor Society, secretary of the Executive Student Council and has been in the Big Brother/Big Sister program as a Cougar Big Sister for the past three years. Earlier in her high school career, she was also in the Interact, Math and Newspaper clubs. For the past two years, she has been a member of the Link Crew which helps incoming freshmen navigate through their first year of high school. Reed, 18, has also helped to publicize the games of the Unified Basketball team the last two years.

Outside of school, Reed learned about business by founding her own company through the Young Entrepreneur’s Academy program. The company she founded, Button Bands, sells yoga pants with reversible color bands on the top. Through the YEA program, she spent a year researching the market, writing a business plan and building a website and it culminated with her winning the YEA competition last spring at which she presented the business to a panel of investors and received the full funding she requested.

“It was hard but I learned so many things through the class, so many parts of the business world,” she said.
Reed interned at Panache Consignment last year and is interning at Sweetwater Energy this summer. She has also been an assistant lacrosse coach for the youth lacrosse team as well as a referee at games.

Over her high school years, Reed has received many awards and honors. So far this year, she has received the Greater Rochester Women’s Council Young Woman of Distinction Award, a Math Department Award and a Science Department Award in addition to being named a 2016 National Merit Scholarship Program commended student.

Reed also was a three-sport athlete at HF-L. She competed in cross country running for four years, placing 43rd at the Section V Class B Championship with a time of 21 minutes, 55 seconds and 89th at the state Class B Championship with a time of 21:50.6 as the team racked up a 21-1 record and won the Section V Class B title. Reed was on the Nordic Ski team for four years, coming in seventh (21:49) at the Section V Championship and helping the team to a sectional title and then placing 15th at the state championship. She concluded her high school career with her third year on the varsity lacrosse team. A captain this spring, she scored 20 goals with seven assists as the club won the Section V Class C title. She has earned multiple Monroe County Scholar Athlete awards over the years as the student with the highest academic average on the team. She was an All-Greater Rochester honorable mention in cross country running, an All-League 1st team selection in Nordic Skiing and All-Greater Rochester honorable mention in Nordic Skiing and a Section V All-Tournament team member, an Exceptional Senior, All-League second team and an Academic All-American in lacrosse. She also received HF-L’s Coaches Award and the coveted Herbert Worboys Award. She may compete in club lacrosse in college.

“The pep rallies we had this year are top memories and going to the state championship in lacrosse this year because no one thought we would get as far as we did,” Reed said.

Robb, the daughter of Maggie and Gary Robb, is HF-L’s salutatorian with a 98 average. She will be attending Colgate University this fall to major in biochemistry. She also looked at the University of North Carolina, the University of Rochester and Binghamton University (part of the SUNY system).

Robb, 17, embraced numerous clubs and activities at HF-L. She co-founded a Math Mentors Tutoring Program for fourth-graders when she was a junior. She has also helped younger students through the Big Brother/Big Sister (the Cougar Brother Sister) program. She is a member of the National Honor Society, French National Honor Society and helped with the school newspaper.

Outside of school, she worked as a lab technician at Howlett Farms, testing rain samples. Robb played for the Lady Roc travel lacrosse club. She volunteered with the Friends of Strong Memorial Hospital last summer. She has explored careers in engineering and medicine through the Perry Outreach Program for high school girls and has shadowed medical professionals, including her own pediatrician, Dr. Cathy Hahn.

“I love science and I love kids,” Robb said. “I babysit a lot and work with kids as a tutor. When I did the shadowing experience with my own pediatrician, it was such a great experience. I like the interaction with kids and families and I think being a pediatrician is what I want to do.”

Robb has earned many awards, including being a finalist for the Notre Dame Club award as a junior. She was named a Colgate Alumni Memorial Scholar and has received AP Psychology and French awards at HF-L. Because of her communication skills, she was chosen as the ACIS Student Ambassador for HF-L’s language department’s trip to Europe last summer.

“It was a great opportunity to experience new cultures and I really liked it,” she said.

Robb competed in two sports this year. She has been on the cross country running team all four years of high school, placing 57th in the varsity “B” race at the Monroe County Championship last fall with a time of 23:31. She was on the varsity lacrosse team for two years and had three assists this spring. She was the lacrosse team’s Monroe County Scholar Athlete this spring and has also been named an Academic All-American in lacrosse. She may play a sport in college at the club level.
“One of my favorite memories is our class and the Cougar Freight Train (the student cheering section) at sporting events this year,” Robb said. “It was a way of our class supporting each other and I think we became close as a class being part of that. The other favorite memory is the Europe trip with about 20 classmates and bonding on that trip.”