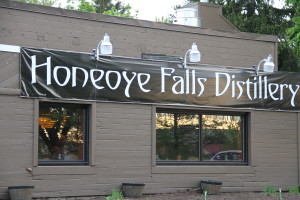 Celebrate the Convergence of Local Partnerships!

You might think June 14th is set aside exclusively for Flag Day. But, wait! There’s more. Tuesday evening starting at 7:00pm, the Honeoye Falls Distillery (168 West Main Street in Honoeye Falls) will unveil its own bourbon – Red Saw Bourbon – that features a cornucopia of local delights.

Red Saw Bourbon is a high-rye bourbon that honors the founding industry of our town. Named after the original saw mill overlooking the Honeoye Falls, the bourbon expresses the true provenance of our region. Using 100% Monroe County sourced grain, Red Saw Bourbon utilizes 51% corn, 34% rye, and 15% malted barley in its mashbill. The corn and rye are grown right here in Honeoye Falls by the Meisenzahl Farm on 15A, and the barley is floor malted, the traditional way, by Pioneer Malting on Paul Road in Rochester. This whiskey has a familiar bourbon sweetness with a complex, and spicy rye character. The finish has a cake batter, cherry sweetness that Head Distiller Teal Schlegel attributes to the patient malting process performed at Pioneer Malting. Great local partnerships have produced a wonderful spirit that we can call our own.

And, to add to the local flavor, our own Sentinel Staff will be featured as special guests of the Honeoye Falls Distillery for the event. Come and chat about your local newspaper and the state of the media in general. Buy next week’s edition on the spot, before it’s delivered to everyone else. Better yet, buy an autographed book from our Publisher Chris Carosa. If you’re lucky, he might even show you the chapter about where the word “cocktail” came from. It’s a story (almost) as old as America itself.