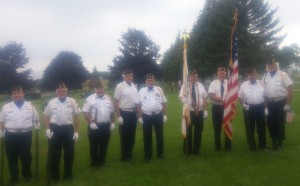 Culver, a Specialist 5 with the U.S. Army, served in the Vietnam War and resided in West Bloomfield. He passed away in December 2015 and was a member of the First Presbyterian Church of Honeoye Falls.

The Veteran service was officiated by Rev. David Ashby, the Minister of the Presbyterian Church in Honeoye Falls and included a rifle salute, Taps, and the folding and presentation of the American Flag by the Post members. Although the weather did not cooperate (it was raining as seen in the photo above), the presentation was flawless and very professional.