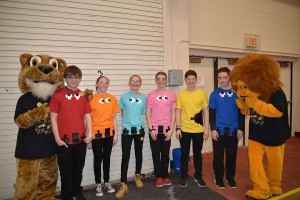 BY WILLIAM VOLKMAN-LIEN
The Finger Lakes Regional, one of several FIRST Robotics competitions, took place at the Rochester Institute of Technology on Friday and Saturday March 16th and 17th.

The Regional is a worldwide and community effort made up of volunteers and many local sponsors. The competition is free and open to the public.

The FIRST Robotics Competition (For Inspiration and Recognition of Science and Technology) is for high school students with interests in math, science, engineering, business, and marketing. The competition includes adult mentors helping high school students build a 120lb. robot in 6 weeks. The challenge, and the robot competing, change annually.

CougarTech 2228 is composed of students from Honeoye Falls-Lima and Rush-Henrietta High School. The team won the Imagery Award for outstanding visual aesthetic appeal and integration of this year’s theme, Power UP, a retro arcade game. The challenge had the team’s robot completing various tasks on the field; collecting power cubes, placing them on scales, defending their side, and climbing 12 inches off the ground at the end of the match. There was significant teamwork, courtesy, and sportsmanship amongst the students and with other teams during the competition.

At the end of March, the team is traveling to Cleveland to compete in the Buckeye Regional for another shot at advancing to the national championship. Team 2228 will strive to make amazing robots to compete and have fun, but more importantly CougarTech will continue making an impact on the academic futures of high school students.