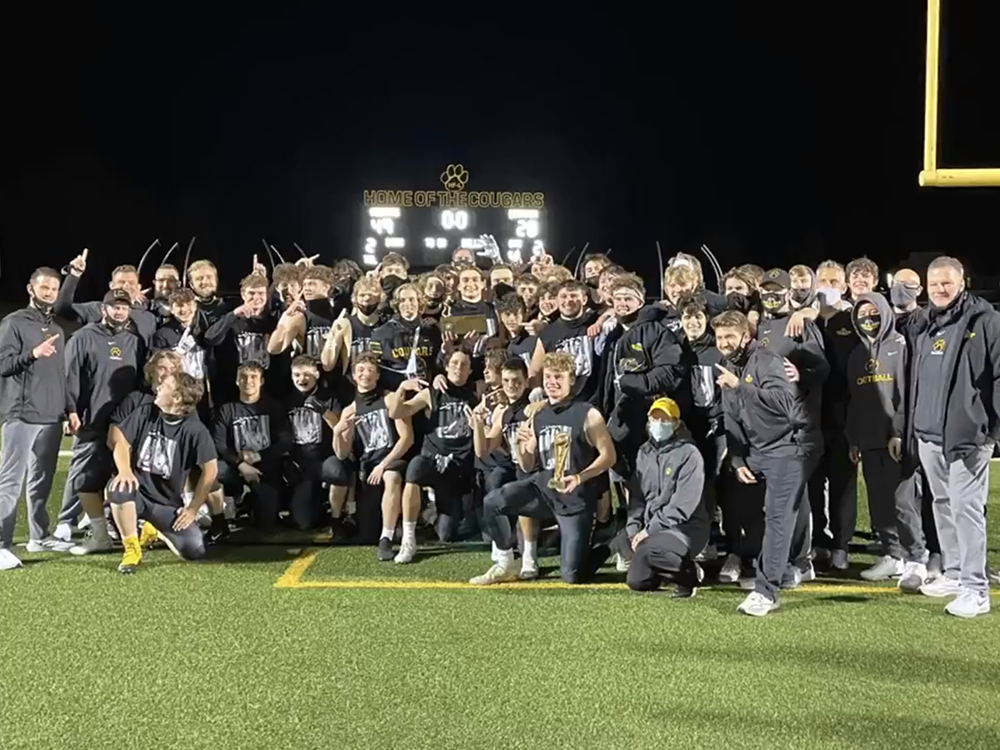 The Section V Class B Football championship was decided in a span of the last one minute, 13 seconds of the first half and the first five minutes of the second when the Honeoye Falls-Lima Varsity Football team scored touchdowns to go from a tie game to a two-touchdown lead and win its first Section V title.

The Section V Class B Football championship was decided in a span of the last one minute, 13 seconds of the first half and the first five minutes of the second when the Honeoye Falls-Lima Varsity Football team scored touchdowns to go from a tie game to a two-touchdown lead and win its first Section V title.

Propelled by those two momentum-changing touchdowns, the top-seeded Cougars went on to beat #2 seed Batavia 49-28 in the Class B title game on May 1 and claim the program’s first Section V title.

“When we got that two-touchdown lead, the kids could taste the championship and see the championship,” said coach John Russ, a 2002 graduate of HF-L who never got to the finals as a player.

“They wanted to finish it right and kept their foot on the pedal and didn’t let up. I was talking with assistant coach Dan Hoyt (who was a former Cougar head coach) and to Bill Donegan (another former HF-L head football coach who Russ played for) and neither of them had teams make it to the finals. Last year, we finally played in a championship and this year, we won it.”

Honeoye Falls and Lima School Districts merged in 1969. The first HF-L Varsity Cougars team took the field in 1974. It was the first time a high school football team had taken the field in the community in nearly 30 years as Honeoye Falls had some form of football in the early 1940s while Lima never did because it had such a small student population, according to local history buff Paul Worboys.

The game didn’t start out right for the Cougars. Following the kickoff, HF-L pushed the Blue Devils backward with a big play on third down coming from Carson Joint stuffing a run play to force Batavia to punt. Unfortunately, a penalty on the Cougars on the punt gave the Blue Devils a first down and new life. On the very next play, Batavia scored on a 53-yard touchdown run by Terrez Smith down the left sideline. The Blue Devils converted the point-after kick for a 7-0 lead with 9:36 left in the first quarter.

HF-L responded back. Set up by a great kick return from Patrick Lustyk (which stood despite a penalty on HF-L for a block from behind thanks to an offsetting penalty on Batavia for a late hit), the Cougars began their opening drive of the game on Batavia’s 43. Consecutive screen passes, one to Lustyk on the left sideline and the other to Mason Wanzenried on the right side, ate up a chunk of yardage. A penalty on HF-L for jumping offsides pushed the Cougars back five yards, but senior quarterback Reece Joint connected again with Lustyk to put HF-L on the Batavia 13. Joint then slung a screen pass to Colt Green on the left side and Green did the rest for a 13-yard touchdown. The kick failed, but HF-L was within 7-6 with 7:39 left in the first quarter

While Batavia took a 21-14 lead on an 11-yard TD pass and an extra-point kick with 4:58 left in the second quarter, it didn’t take the Cougars long to knot the score again. Jacob Derby scampered into the end zone on a 21-yard TD run to culminate a four-play, 68-yard drive. The key play in the drive was a 35-yard connection from Joint to Lustyk. Xavier Carbonel’s kick after Derby’s touchdown tied the game at 21-all with 2:59 left in the second quarter.

After HF-L’s defense forced a three-and-out, the Cougar offense took over at its own 46 with 1:13 left in the first half. A Joint-to-Derby screen pass put the ball into Batavia’s end of the field. On the TD pass, Joint rolled to his left to avoid a rush and rifled a pass toward the left sideline and a waiting Lustyk at about the eight-yard-line. Lustyk, a star player for the Cougar basketball team the past three winters, batted the ball in the air to himself before getting a firm grasp on it. He then shed one tackler but another grabbed his jersey. Lustyk, however, proceeded to drag him the four yards to the end zone as time expired for a 35-yard TD. Carbonel made the extra-point kick to send the Cougars into halftime with a 28-21 lead.

“Patrick’s play changed the entire game,” Russ said. “They had us bottled up. Reece looked right and then to his left and threw it up and let Patrick make the play. Patrick’s willpower to get into the end zone was incredible.”

While Batavia scored on a 75-yard touchdown run and extra-point kick to pull within 42-28 with 7:57 remaining in the game, the Cougars made sure that didn’t matter as Derby scored on a seven-yard TD run and Carbonel converted his final extra-point kick for the final margin with 5:00 left.

“The more we watched film from our 2019 game, the more comfortable we were about defending against the run,” Russ said. “We knew Smith would bust a few runs, like the 53-yard run, because he’s a good player and sometimes you just have to tip your hat to him. But, the key was our defense not hanging their heads after he did that and our guys didn’t hang their heads and we wound up containing him effectively. Offensively, even though we threw for a lot of yardage, we also had a solid effort on the ground and the only way to have a successful throwing day is by having an effective run game so that the balance keeps the defense on its toes. Our special teams unit also had a good game and did not allow any big plays.”

For Joint, Lustyk, Wanzenried, and Preston Huff, it was finally a championship after coming so close to two championships before: once in the 2019 football sectionals (a 12-0 loss to Livonia) and a loss in the sectional Class A2 basketball finals back in March (67-59 to East High).

“I wouldn’t necessarily say losing the basketball championship was a motivator, but it was definitely a learning experience for the football final,” Joint said. “We worked so hard and had to grind out every game to get to the basketball final and when we got there we already felt so accomplished. In football, we knew that the title was ours to win and that any other ending to a season would not be what we expected of ourselves. The biggest motivator for football was losing in the championship last year and that spurred our commitment to offseason weight room and practices.”

Joint, the game’s Most Valuable Player, completed 23-of-32 passes for 343 yards. Derby had all 134 yards that the Cougars had on the ground, carrying the ball 22 times. Lustyk made nine receptions for 190 yards. Smith had three catches for 56 yards, Green five catches for 36 yards, Derby two catches for 31 yards, Killenbec three catches for 20 yards, and Wanzenried one catch for 10 yards.

“My reaction to winning MVP was a bit of disbelief since I had never seen a team win like we did growing up, and to be the first Section V MVP from HF-L is incredible,” Joint said. “However, no QB can win MVP if they don’t have an offense surrounding them. The line worked incredibly hard this year, and a few of them had to change from skill players to line in order to make the team successful. The receivers from this year made it hard for me to have a bad game because if I threw the ball anywhere around them, it was going to be a catch.” 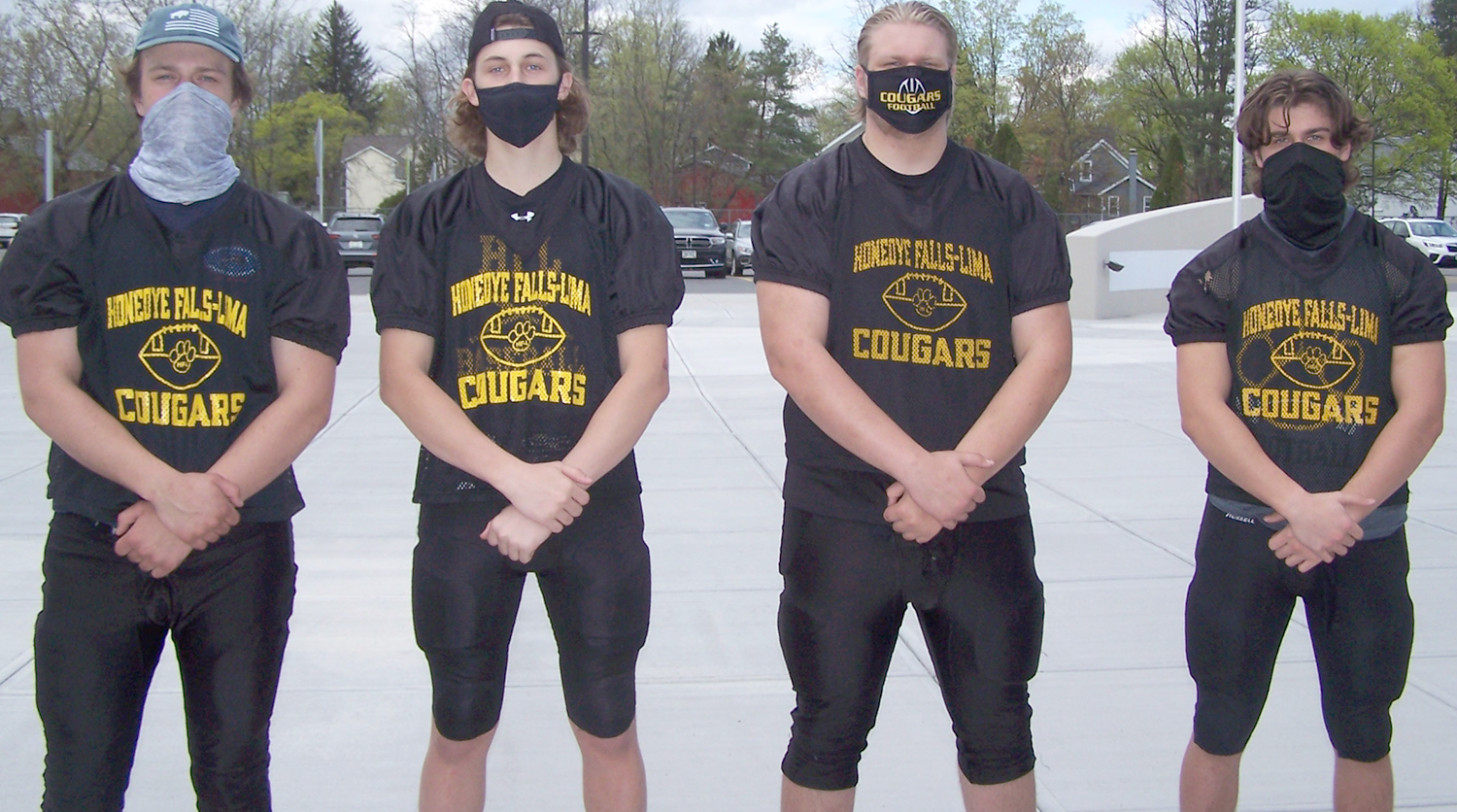 HF-L finished with a 7-0 record thanks to that Section V Class B championship win. 20 seniors graduate from this squad.

Henry Baumer joined the team this season. An offensive and defensive lineman, Baumer made two tackles with one sack.

Andrew Childs played on varsity for two years. Childs was a wide receiver and defensive back, catching four passes for 50 yards and two touchdowns and making seven tackles.

William Czora ended two seasons on varsity. Czora was an offensive and defensive lineman with two tackles and a fumble recovery.

Jacob Derby finished a two-year varsity career. A co-captain, Derby was a running back and defensive back, leading the Cougar ground game with 68 carries for 437 yards and 12 touchdowns to go with five catches for 158 yards and one TD and, on defense, eight tackles. 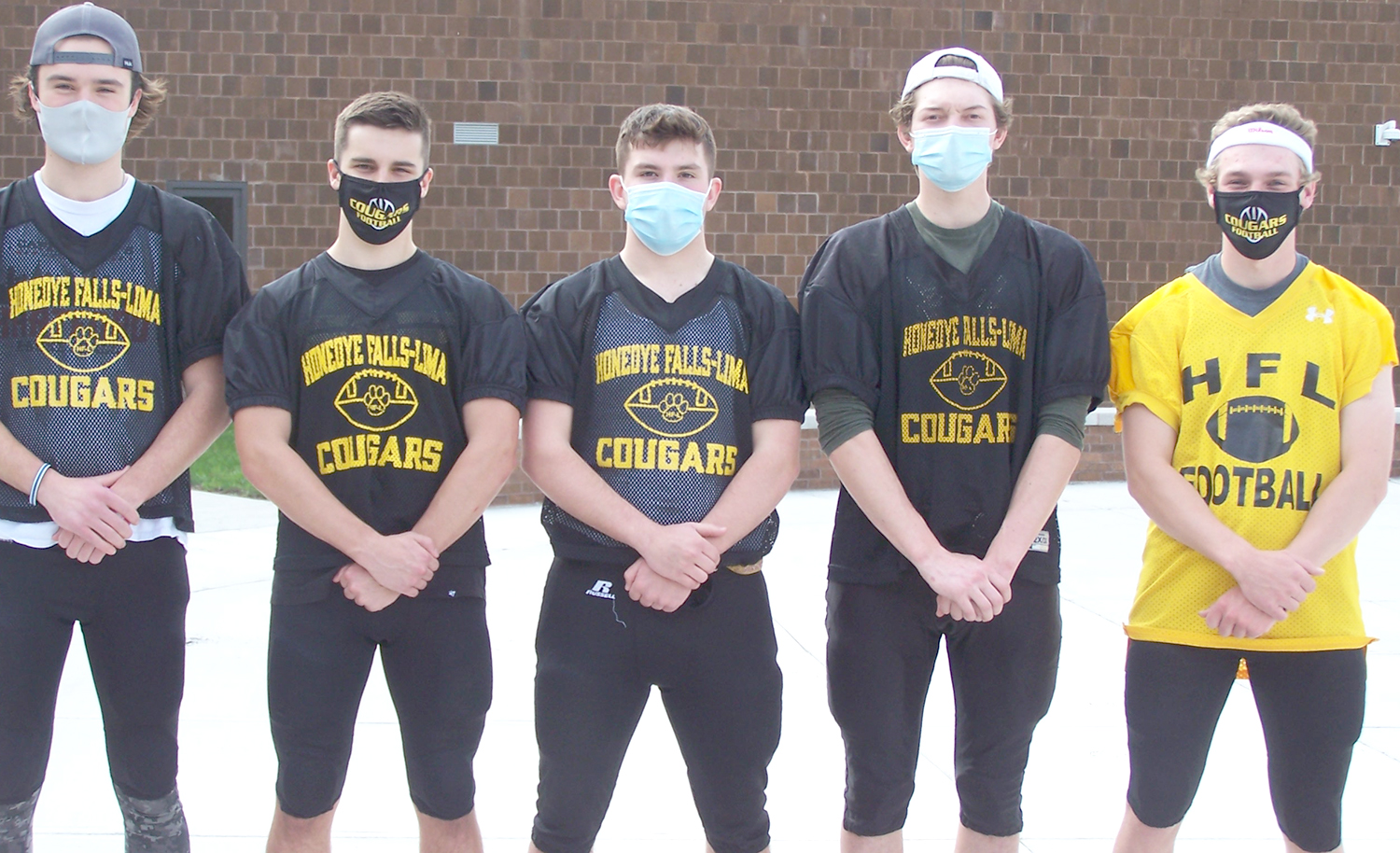 Jack Graney joined the varsity this season. Graney was an offensive and defensive lineman, helping the O-Line pave the way for 2,141 yards on offense and making three tackles on defense.

Colt Green played on varsity for two years. A co-captain, Green was a wide receiver and defensive back. Green had one carry for four yards and 18 catches for 150 yards and five TDs on offense and one tackle on defense.

Mitchell Greer was on the varsity for two seasons. A starter on the offensive line, Greer was a key player on the O-Line that helped the offense total 2,141 yards and he made five tackles with one sack on defense.

Preston Huff competed on varsity for two seasons. Huff played on the offensive and defensive lines. He made nine tackles with two sacks.

Reece Joint finished a terrific two-year varsity career. The starting quarterback and a co-captain, Joint completed 77-of-110 passes for 1,205 yards and 19 touchdowns and rushed nine times for 72 yards and two touchdowns. 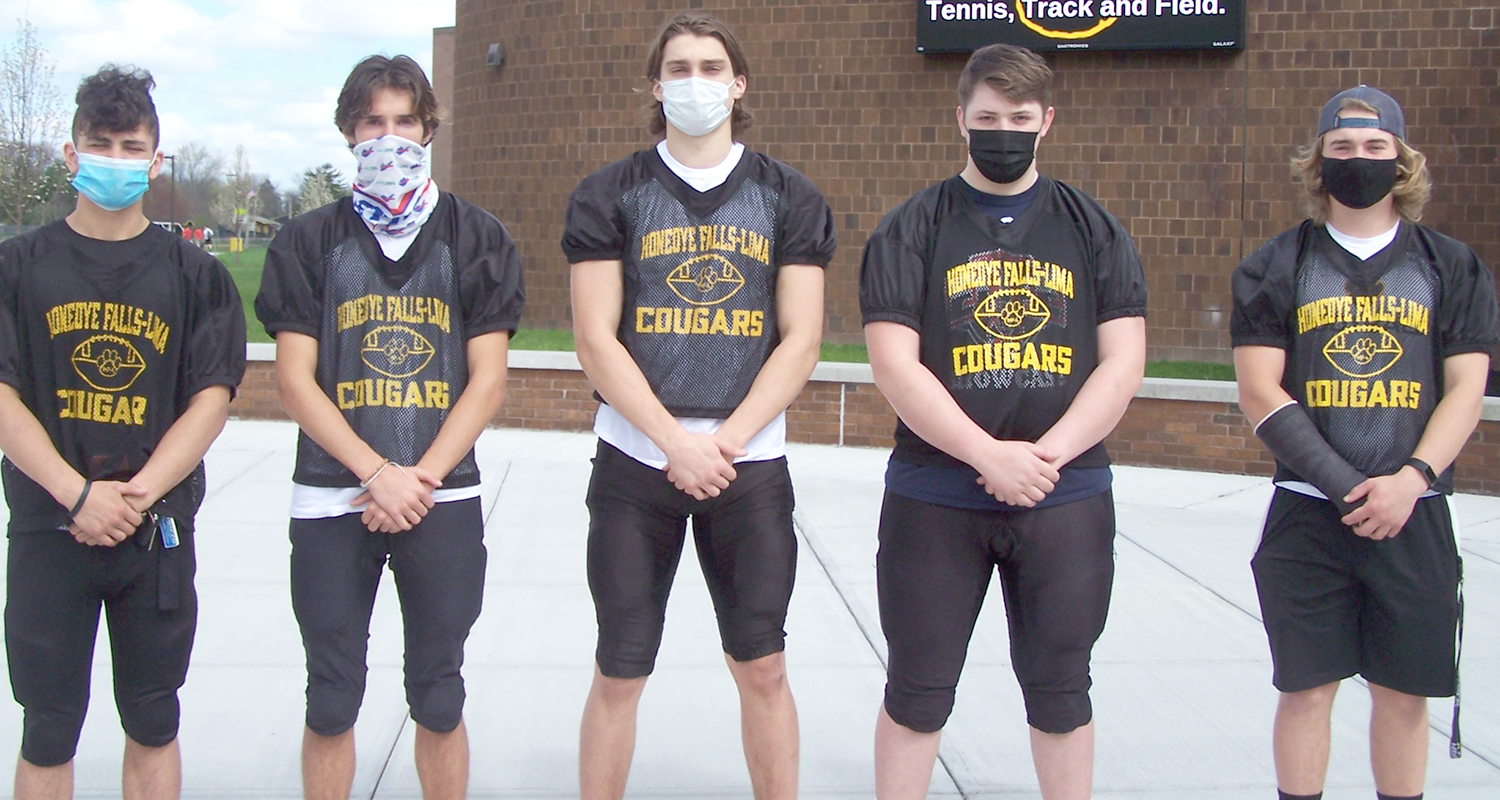 Jaden Kuhn spent two seasons on varsity. Kuhn played wide receiver and defensive back and made one catch for one yard.

Justin Lewis joined the varsity this season. Lewis was a reserve wide receiver and defensive back

Patrick Lustyk concluded a two-year varsity career. A co-captain, Lustyk was a starting wide receiver and linebacker. He had 25 receptions for 439 yards and six touchdowns on offense and 18 tackles for the Cougar defense.

Samuel Miller played on varsity for two seasons. Miller was an offensive and defensive lineman, helping the offense generate 2,141 yards.

Hayden Price played on varsity for two years. Price was a running back and linebacker and made four tackles this season. 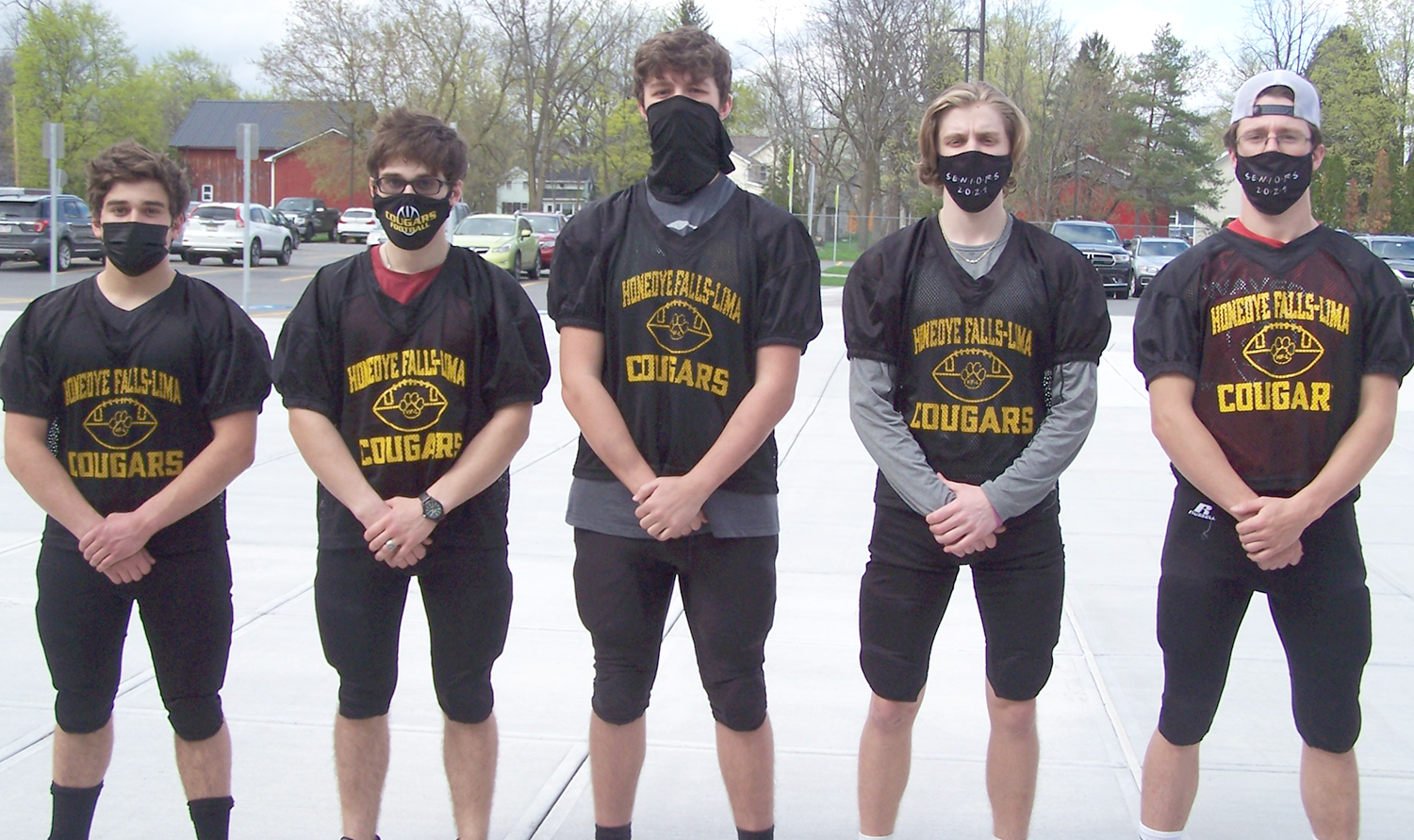 Ryan Sanza wound up two years on varsity. An offensive and defensive lineman, Sanza had two tackles and forced one fumble.

Matthew Shutes ended two seasons on varsity. Shutes was a reserve on the offensive and defensive lines.

Mason Wanzenried finished two years on varsity. A co-captain, Wanzenried was a starting wide receiver and defensive back, rushing once for 16 yards and catching nine passes for 180 yards and three TDs on offense with nine tackles and one fumble recovery on defense.

Nolan Yates was on varsity for two years. An offensive and defensive lineman, Yates had 14 tackles, three sacks, and one forced fumble.