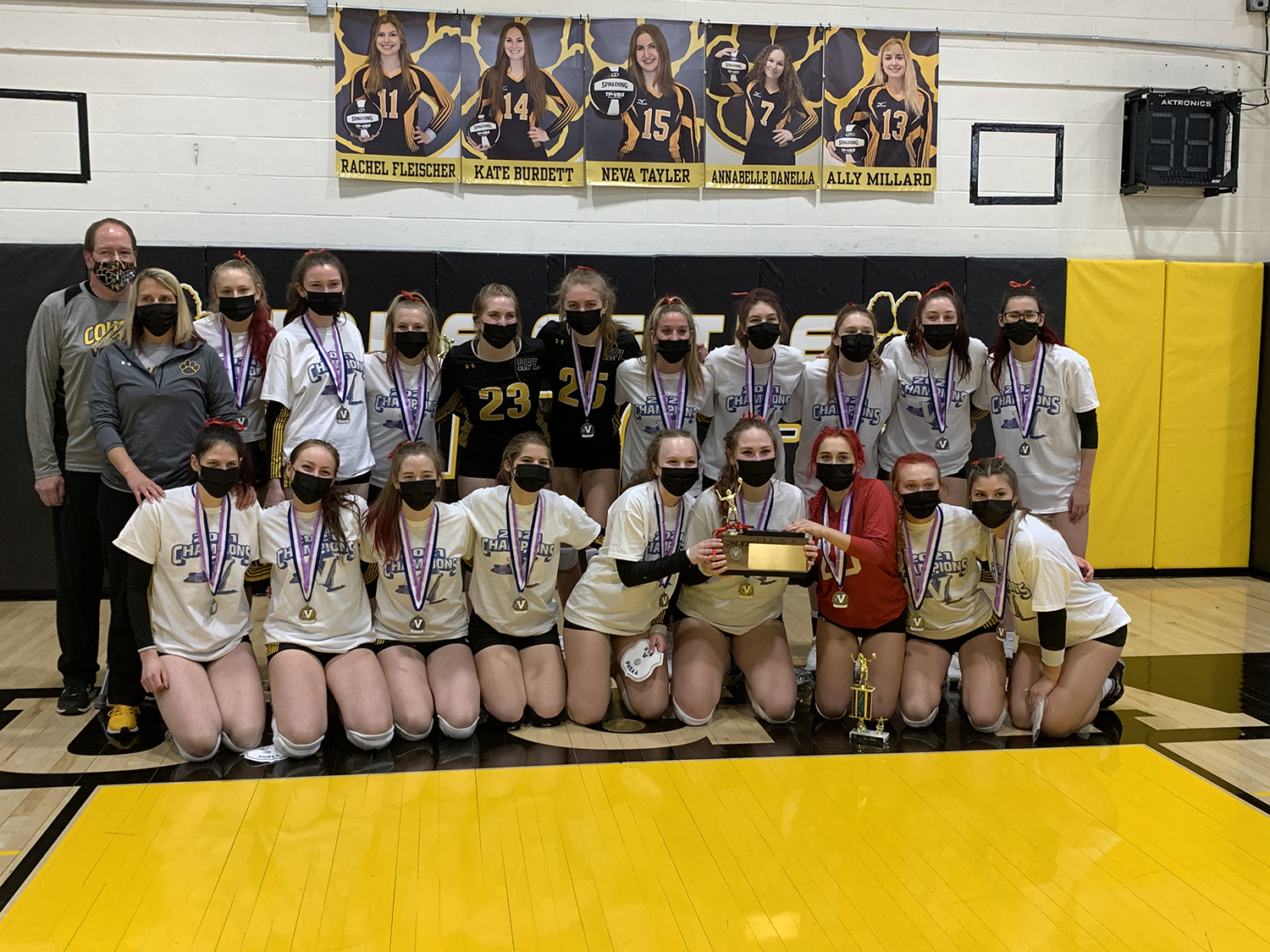 Players and coaches from the HF-L Girls Varsity Volleyball team were happy to pose for this photo after winning the Section V Class B title. Photo by Sarah Kamm

While it took a little bit of time, the Honeoye Falls-Lima Girls Varsity Volleyball team meshed the talents of the seven returning members off its 2019 Section V Class B championship squad with the seven newcomers and also found consistency in its serving to repeat as the Class B champions.

While it took a little bit of time, the Honeoye Falls-Lima Girls Varsity Volleyball team meshed the talents of the seven returning members off its 2019 Section V Class B championship squad with the seven newcomers and also found consistency in its serving to repeat as the Class B champions.

But, the Lady Cougars had a strong desire to claim the championship, albeit one born out of sorrow. HF-L dedicated the last two weeks of its season to one of their most ardent supporters – high school main office legend Nancy Pool who passed away on April 16. 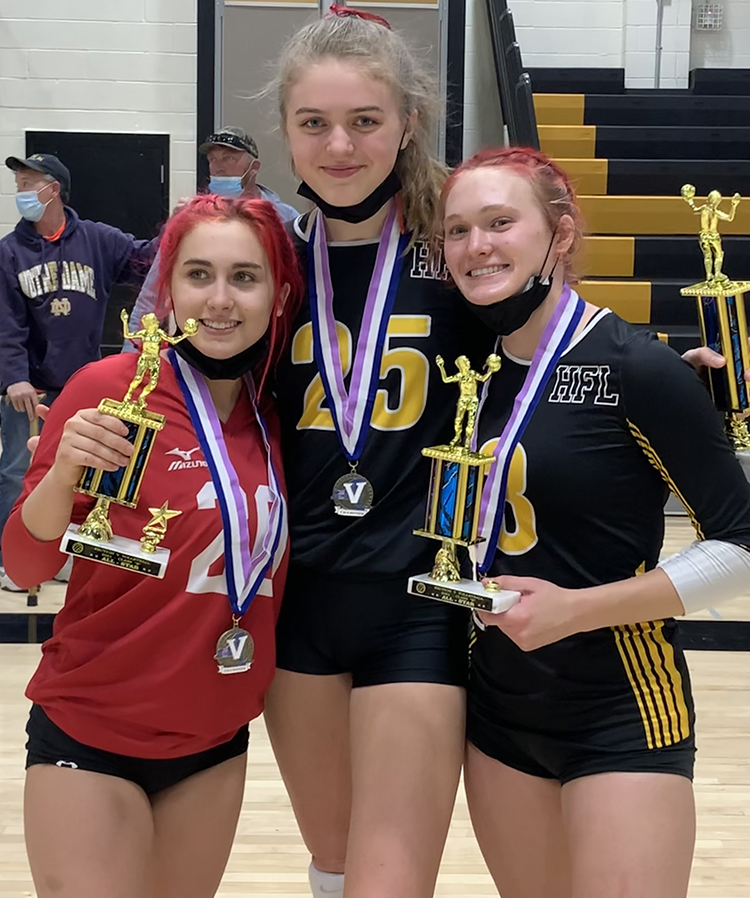 “Mrs. Pool was our biggest supporter,” said junior Teagan Kamm, who was named Most Valuable Player of the Class B All-Tournament team. “Her presence meant a lot to us. We made a poster that was attached to our scorer’s table.”

The poster read: “To Our Most Dedicated Fan Nancy Pool. We will miss you.” and had four photos of Mrs. Pool on it. After the team won the title, the squad tweeted out a photo of the poster with these words “This one was for you Nancy Pool! We know you were watching!”

“To be honest, we were looking forward to her seeing one of our matches,” coach Rene Monks said. “Nancy had gone up to Glens Falls both years we were in the state tournament and really supported the team. The girls took the news of her passing hard. But, we all got our emotions out and, because we knew she would want us to, we went out and finished what we started. Some of the girls dyed their hair red and others wore red ribbons in their hair in support of the American Heart Association and Nancy.”

HF-L, seeded third, routed #6 Edison/School of the Arts by 25-25-25 to 7-9-11 in the Class B quarterfinal round on April 27 to begin its run to the title. The Lady Cougars hammered their opponent with a nearly flawless performance on serves: 34 aces in 72 attempts and only 10 service errors. Alex Ardieta and Allison Millard each tallied nine aces. Ella Peters followed with six aces, Madison Macko three, Rachel Fleischer three, Ariana Wilson two, Elizabeth Smith one, and Katlin Blodgett one. HF-L also had good play at the net. Teagan Kamm led the way with five kills to go with one block. Kate Burdett chipped in four kills and had two digs on defense. Brooklyn Bellavia added four kills and one dig. Fleischer collected two kills with one dig. Anya Sheradin garnered two kills, Brynn Mooney two kills, and Macko one kill. Rowan Considine dished out nine assists along with three digs and two kills while Wilson handed out seven assists with one dig. Ardieta had one assist. Millard paced the defense with four digs and had one assist. Annabelle Danella finished with three digs, Smith two digs, Blodgett one dig, Mooney one dig, and Peters one dig.

The Lady Cougars outlasted #2 Palmyra-Macedon by 26-20-23-25-25 to 24-25-25-21-21 in the Class B semifinals on April 29. Excellent play at the net was a big factor for HF-L as it pounded 56 kills as a team in the match which was tight the entire way. Kamm led the team with 16 kills along with three digs. Burdett produced 11 kills, 12 digs, and one block. Macko, Mooney, and Nina Scott registered seven kills apiece. Considine and Bellavia had two kills apiece and Sheradin, Danella, Peters, and Millard one kill each. Millard served six aces, Considine two, Peters one, and Ardieta one. Considine had a huge day setting with 44 assists while Millard provided the other five assists. Millard paced the defense with 69 digs. Considine followed with 19 digs, Danella 16, Peters 14, Macko 12, Bagley 12, Mooney four, Ardieta four, Scott three, Bellavia three, Wilson two, and Sheradin one. Bellavia wound up with two blocks, Considine one and Mooney one.

HF-L swept #4 Wayne in straight sets 25-25-25 to 19-18-14 in the championship match on May 1. The Cougars trailed 5-2 early in the first set, came back to tie at 6, and then took the lead at 12-11 which it never lost, building six-point leads a couple of times. In the second set, the Cougars built a 5-0 lead behind the serving of Millard and never relinquished it. In the third set, HF-L got the first point on a kill from Bellavia, but Wayne hung tough and tied the set at 2. The Cougars got the next five points for a 7-2 lead and extended that to 10-3 before Wayne pulled within 12-10. HF-L boosted its lead to 16-10, but Wayne got a point to come within 16-11. A Considine kill gave HF-L a 17-11 advantage that it pushed to 19-11. Wayne closed to within 19-14, but HF-L got a point and the ball back after a Wayne miss for a 20-14 lead. A kill by Mooney, a kill by Bellavia and three service points from Ardieta later and the Cougars had their title.

“We knew they were a good team, so we wanted to come out strong in the final set,” said Kamm, who was joined on the All-Tournament team by Considine and Millard. “We kept our energy high.”
The Cougars hammered 33 kills as a team, led by 14 from Kamm, who also had one assist and one dig. Mooney notched seven kills, Considine three, Bellavia three, Burdett three, Macko two, and Millard one. Millard paced the defense with 22 digs. Danella added 15, Peters 10, Wilson nine, Macko eight, Burdett six, Ardieta three, Mooney two, and Considine two. Considine set for 26 assists while Millard chipped in two and Peters one. The team served just nine aces, three by Macko, two apiece from Ardieta and Millard, and one each from Wilson and Peters. While serving had sometimes been a trouble spot during the season, HF-L’s serving overall was a key factor in the championship.

“We served much better during the tournament and, in the championship match we had just two service errors,” Monks said. “Our defense, which is mainly Allison and Ella, was rock solid. We wanted the girls to attack and serve aggressively, keep our unforced errors down and play our game. Against Pal-Mac, we got away from our game plan a couple of times and it cost us in those two sets we lost. We just told the girls to remember our game plan: when we have the ball, we control the match against Wayne.” 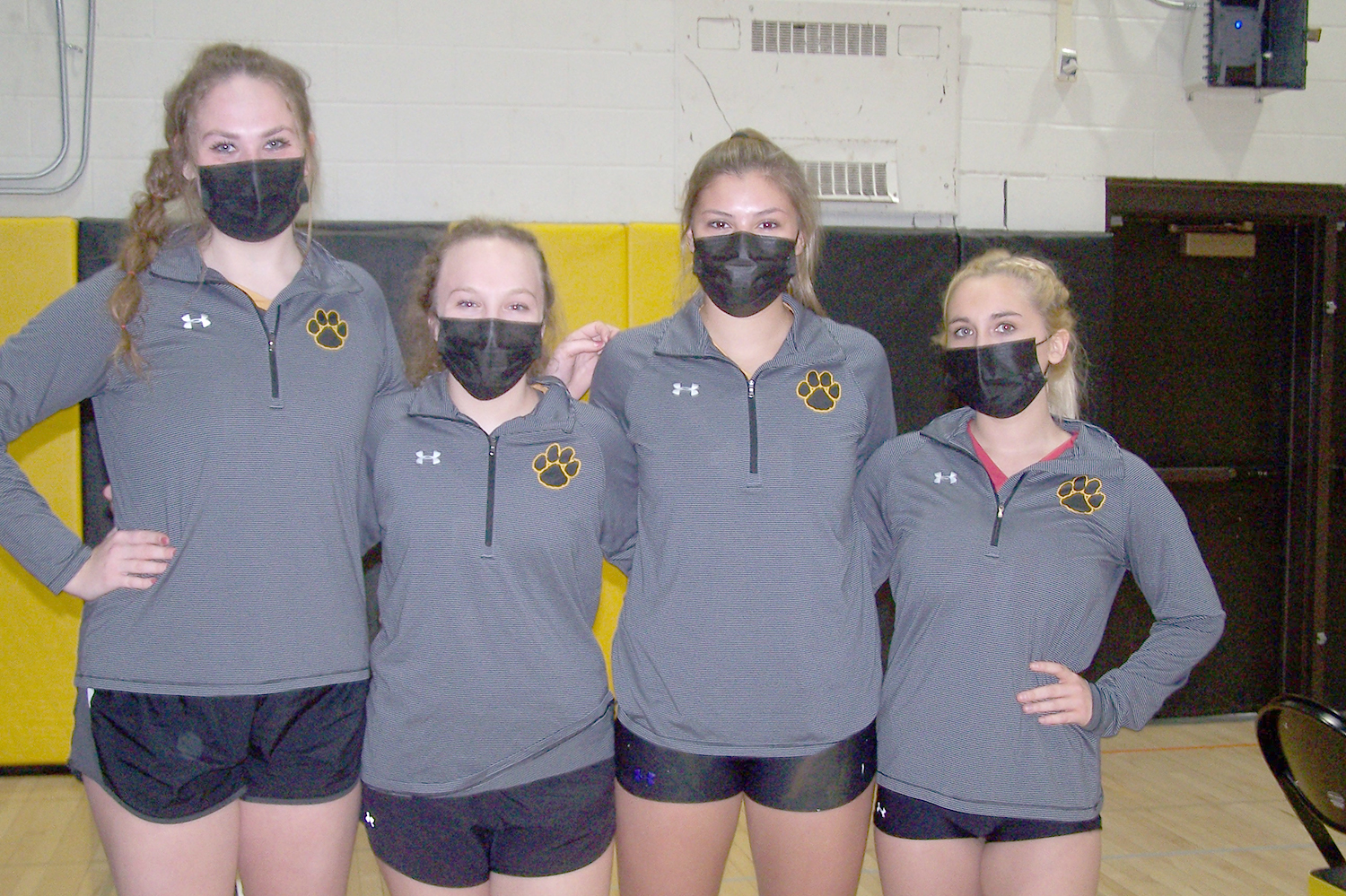 From left, seniors Kate Burdett, Annabelle Danella, Rachel Fleischer, and Allison Millard posed for this photo prior to a match this season. Senior Neva Tayler was unable to be present. Photo by Donna MacKenzie

HF-L finished the season with a 12-6 record to go with the Class B crown. Five seniors graduate.

Kate Burdett competed on varsity for two seasons. A co-captain, Burdett was a right side and middle hitter. She was second on the team in kills with 99, seventh in service points with 28, seventh in aces with three, third in blocks with six, and sixth in digs with 77.

Annabelle Danella played on the varsity for two years. Danella was a defensive specialist and was fifth on the team with 89 digs and also had two service points, one kill, and one assist.

Rachel Fleischer joined the varsity this season. Fleischer was an outside hitter and was ninth on the team with 16 kills, seventh on the team with three aces, and added 37 digs and 11 service points.
Allison Millard finished a two-year varsity career. A defensive specialist and libero, Millard was the queen of digs with a team-high 453, second in both service points (146) and aces (41), third in assists with 32, and 10th in kills with 10.

Neva Tayler was on varsity for two seasons. Tayler was an outside hitter and was ninth in service points with 16 and eighth in aces with two to go with 12 digs and two kills.