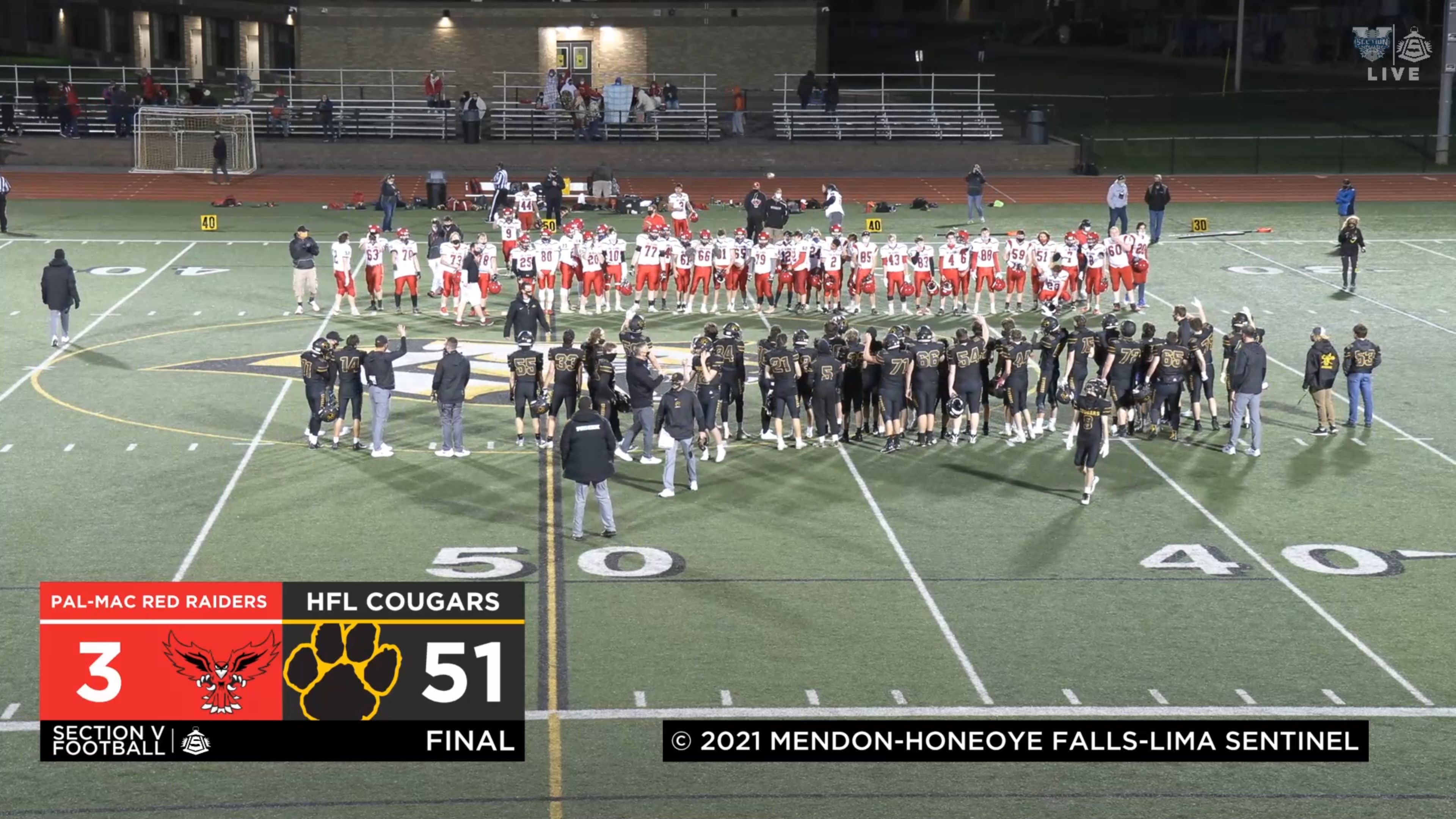 A screenshot of the Sentinel’s live broadcast showing players from Honeoye Falls-Lima and Palmyra-Macedon saluting one another following their April 14th contest. Photo Credit: MHFL Sentinel

The first-seeded Honeoye Falls-Lima Cougars football team will host the fourth-seeded Palmyra-Macedon Red Raiders in the Semifinal Round of the 2020-21 Section V Class B Football Sectional Tournament. The game will be played at HF-L this Sunday, April 25th, at 6 pm. You can view the entire Class B bracket on Section V’s website. The Sentinel‘s own Peter Carosa and Steve Bradley will provide commentary on Varsity Media’s livestream of the game.

HF-L finished the regular season with an undefeated 5-0 record. The Cougars outscored their opponents by a margin of 168-9 during the regular season. HF-L is looking to get back to the Class B Championship game after losing the District’s first appearance in the title game a season ago. Pal-Mac ended the Spring 2021 campaign going 3-3 and are seeking to avenge the 12-14 Semifinal loss to HF-L during last season’s tournament.

The two teams faced one another only a week ago with HF-L winning that contest by a score of 51-3. The Cougars were led by senior running back Jacob Derby, who scored three rushing touchdowns, senior quarterback Reece Joint, who tossed two touchdown passes, and junior wide receiver JT Killenbec, who took a punt 52 yards to the house. Pal-Mac’s three points came from a 36-yard field goal by junior kicker Brenden Moquin. You can watch the highlights from the Sentinel‘s broadcast of the Week Five contest. Additionally, you can read the full recap of HF-L’s victory in this week’s edition of the Sentinel.

The winner of HF-L and Pal-Mac will face the winner of the other Semifinal game, either the two-seeded Batavia Blue Devils or the three-seeded Newark Reds, in the Class B Championship game. The title game will be played at the higher seed during the weekend of May 1st.