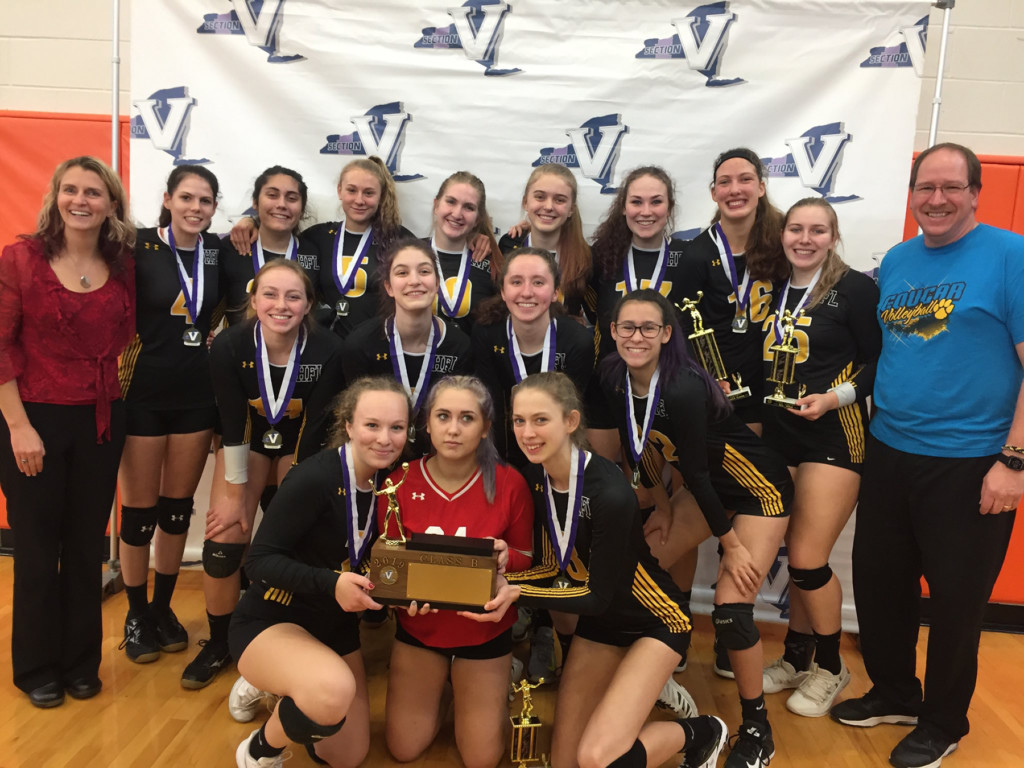 Coaches and players from the HF-L volleyball team pose with their latest hardware. Photo courtesy of HF-L Athletics.

The Honeoye Falls-Lima Girls Varsity Volleyball team captured its first Section V title since 2016 and it did not allow any of its three opponents in the tournament to win a game.

HF-L, which earned the top seed in the Section V Class B Tournament, began its run to the crown with a 25-25-25 to 17-10-11 victory over #8 seed Geneva on November 5 in the quarterfinal round. The Lady Cougars, who were ranked third in the most-recent state Class B poll, hammered 31 kills as a team. Kara Balmer led the way with eight of those kills. Leah Samson and Teagan Kamm pounded six kills apiece. Danielle Fisk added five and Kelly Taylor five. Taylor chipped in 23 assists. In addition to its attack at the net, the Lady Cougars served well, garnering seven serving aces as a team with three of them by Samson. Samson paced the defense with 11 digs while Ella Peters compiled 10 and Brynn Mooney five.

The Lady Cougars overpowered #4 Livonia 25-25-25 to 12-11-13 in the semifinal round on November 7. Balmer had a monster match with 11 kills to go with five blocks. Taylor set for 27 assists.
HF-L topped two-time defending Class B champion #2 seed Wayne by 25-25-25 to 15-21-20 in the championship on November 9. The Cougars (18-2) never trailed in any one of the three games. Wayne was only able to come within 2 or 3 points in each. Samson’s solid kill that Wayne could not return was the match-winner.

“The girls took charge in each game,” coach Rene Monks said. “We came in with a lot of energy and just took over. I do believe that our tough schedule helped prepare us for the finals. We played all Class A schools except for a couple during the regular season. We were very aggressive in the match and attacked the ball as much as we could. We also served well and kept the ball deep.

“The girls are so excited and ready to go to the Regionals,” Monks said.

HF-L plays Olean (from Section VI) in the Regionals on November 12.