HF-L football falls to Livonia in Class B championship

Home HF-L football falls to Livonia in Class B championship

The Honeoye Falls-Lima Varsity Football team held Livonia to two first quarter scores, but could not capitalize on any of its own opportunities inside the “red zone” in the Section V Class B Championship game on November 9.

The third-seeded Cougars lost 12-0 to the fourth-seeded Bulldogs in the latest clash between the two old Livingston County League rivals. 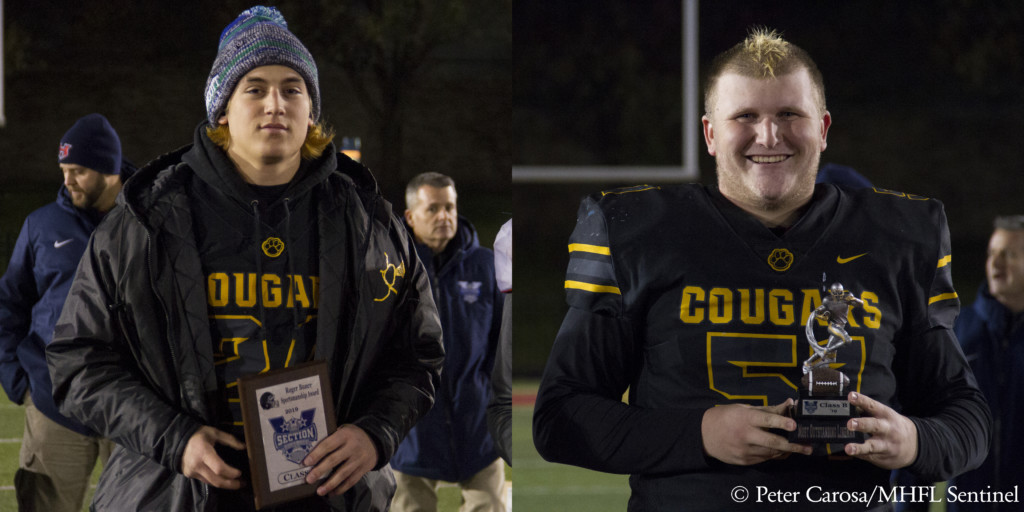 “We gambled by trying the onside kick,” coach John Russ said. “We were hoping to get the ball, but knew they might recover and have a short field to work with. We were a bit surprised they came out with a pass for the first play, but our biggest concern was their pound and ground game would chew up the clock.”
HF-L’s first possession ended quietly. A pass from Turner Wilson to Patrick Lustyk on the left side lost a yard when Lustyk slipped on the turf. Two following passes were incomplete so the Cougars had to punt.

The Bulldogs started their next drive at their own 41 following the punt. Pounding the ball to the left, to the right and up the middle, Livonia moved the ball steadily down the field. The Bulldogs converted two third-and-five situations with a 13-yard run and an 11-yard run. Mitchell Bulling sacked the Livonia quarterback for a loss of five yards back to the HF-L 16 but, facing a third-and-13, the Bulldogs picked up six yards on a run and gambled successfully on a fourth-and-seven from the HF-L 10 by completing a 10-yard touchdown pass over the middle. Cougar defensive back Colt Green intercepted the two-point conversion pass in the end zone so the Bulldogs led 12-0 with 1:09 remaining in the first quarter

HF-L’s second possession of the game started well as the Cougars began the drive on their own 34. Peter Romig had an eight yard run up the middle and, after an incomplete pass and a run for no gain, ran 17 yards to convert a fourth-and-two and move the ball to the Livonia 41. He gained another three yards on a run, but on third-and-7 from the Livonia 38, Wilson’s pass was intercepted at the Livonia 11 to end that drive early in the second quarter. The Cougar defense forced the Bulldogs to punt after eight plays on their next drive. Unfortunately, HF-L could not capitalize on its third possession of the game as Wilson’s pass attempt to Mitch Slymon was intercepted by Livonia at its own 1 yard line. HF-L’s defense stifled the Bulldog offense, forcing a three-and-out series. Despite good field position following the punt that was downed at the Livonia 30, HF-L could not take advantage as a four-yard run by Wilson was negated when a pitch to Romig was sniffed out by the Bulldogs and stuffed for a six-yard loss. Another pass was batted down and, on fourth-and-12 from the Livonia 32, another pass fell incomplete. The clubs went into halftime with Livonia holding onto the 12-0 advantage.

“We just made too many mistakes, both on offense and defense,” Russ said. “The penalties came at inopportune times, either killing offensive drives for us or extending offensive drives for them. We had the ball in or near the red zone and couldn’t convert. The interceptions on the second and third drives took the wind out of us a bit, but we were still playing well.”

The Cougars took the opening kick of the third quarter. Starting at their own 34, HF-L moved the ball. Romig slashed through the defense for a 21-yard pickup to advance the ball to the Livonia 44. Wilson and Romig gained two and three yards, respectively on runs. Wilson then had a nifty 16-yard run, starting up the middle before cutting to the left side where he was knocked out of bounds at the Livonia 16. The Bulldogs, however, were whistled for a late hit and that pushed the ball to the Livonia 8. Unfortunately, the Cougars then committed a personal foul on the next play, pushing the ball back to the Livonia 25. Wilson gained five yards on a run. But, two passes fell incomplete and the team turned the ball over on downs at the Livonia 20.

“I think that was the turning point of the game,” Russ said. “If we score there, then they become a little nervous because we had made a couple of defensive adjustments after their two touchdowns and, while they were moving the ball, it wasn’t like they were during those two TD drives.”

Although the Bulldogs marched to the HF-L 19 on the following drive, the Cougar defense forced an incomplete pass on fourth-and-15 to get the ball back for its offense. HF-L ran three plays in the next drive before the third quarter ended, including a 23-yard pass from Wilson to Lustyk. On the first play of the fourth quarter, Wilson found Slymon down the left side for a 29 yard connection that took the ball to the Livonia 29. The Cougars lost three yards on a run. Then, on second-and-13 from the Livonia 32, Wilson’s pass over the middle was intercepted and returned to the Livonia 39. The HF-L defense forced a three-and-out by Livonia to get the ball back for its offense. The Cougars converted a huge fourth-and-6 from their own 26 when Wilson found Green over the middle. Green hauled in the pass and cut to the left side before being hauled down at the Livonia 36. Once again, the Bulldogs were whistled for a late hit penalty that tacked on another 15 yards to move the ball to the Livonia 21. After a two-yard gain on a run to the Livonia 19, Wilson was sacked for an 11-yard loss back to the Livonia 30. A third-and-19 pass was incomplete and Wilson gained only one yard when he was chased out of the pocket on the fourth-and-19 situation with just under five minutes remaining in the game. The Bulldogs kept the ball on the ground and the clock running, converting a fourth-and-one situation when the Cougar defense jumped offsides and a third-and-four situation when the quarterback picked up seven yards to seal the win.
Wilson completed 5-of-15 passes. Romig rushed 13 times for 69 yards and Wilson 10 times for 54 yards, Slymon caught two passes for 32 yards, Lustyk two for 23 yards and Colt Green one for 53 yards.

“I was proud of the kids and how they did this season,” Russ stated. “They have a lot to be proud of and we made history by getting to the title game for the first time.”