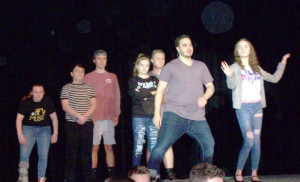 To paraphrase the lyrics to the old television show “They’re creepy and they’re kooky, meet the Addams Family” as the Honeoye Falls-Lima High School students showcase their musical theatre talent by presenting The Addams Family on March 21, March 22 and March 23 at the District Auditorium.

The plot of the musical comedy is not based on the television show or the two films, although it does begin with the familiar theme song. As the show opens, the Addams Family (father Gomez, mother Morticia, daughter Wednesday, son Pugsley, Uncle Fester and Grandma are visiting the graveyard for an annual gathering of all family members (living, dead and undecided) to celebrate what it is to be an Addams. Uncle Fester stops the Ancestors’ return to their graves to ask for their help as Wednesday has invited her new (normal) boyfriend Lucas Beineke and his parents, Alice and Mal, to dinner over the protests of her parents. Wednesday admits to her brother that love is pulling her in a new direction while Gomez and Morticia worry that she is taking this different path. What happens when the Beinekes arrive for the dinner? Come to the show and see the hilarity for yourself.

“After the last two musicals we have done, the kids were looking for a newer show and The Addams Family fit well with the comedic talent of the kids we have,” artistic director John Hennessey said. “It’s a strong cast and the show is boy meets girl, their crazy families get involved and it is fun.”

For senior Riley Goold who plays the role of Morticia, this show will mark the end of her years on the stage at HF-L. Prior to a rehearsal last Monday night (March 11), Goold talked about being Morticia. 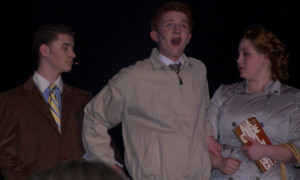 Seamus Gillis (center as Lucas Beineke) tells his parents Aiden Goold (Mal Beineke on left) and Raelyn Bovenzi (Alice Beineke, right) that he wants them to be normal and not rude during the dinner at the Addams family home in a scene from the show during a rehearsal on March 18. Photo by Donna MacKenzie

“She has a lot of stoicism and strikes poses so she has to command the stage with these subtle emotions,” Goold explained. “On camera, the emotions can be more subtle, but they need to be bigger on stage and I feel like I have added more sarcasm to the role to push her points forward.”

The role of Morticia is something different for Goold. In her first musical in high school, she played The Bird Woman and was in the ensemble of Mary Poppins. As a sophomore, she played Mable in The Pajama Game and last year, as a junior, was Mrs. Marshall in Irene.

“When I started high school, I hated acting because I wasn’t really good at it and I was uncomfortable with it,” Goold said. “But the further along I went, with both the drama shows in the fall and the musicals in the spring, it has helped me grow as a person and become less shy. I also discovered that this is one of the most forgiving groups.”

Senior Charles (CJ) Tomaszewski also brings down the curtain on his high school years on the stage in another comedic role, following on the heels of his bring-down-the-house performance as Madame Lucie in Irene last spring. He portrayed Mr. Hasler, the owner of the Sleep-Tite Pajama Factory in The Pajama Game, as a sophomore and Von Hussler in Mary Poppins as a freshman.
While he has enjoyed all the different roles he has had in the high school musicals, Tomaszewski admits that Madame Lucie and Uncle Fester hold special places in his heart.

“I loved Madame Lucie because of the comedic timing and the wild side of the role,” Tomaszewski said. “Uncle Fester is the most crazy, ambitious character that I have ever taken on. For some reason, he’s not like the rest of the family. Being larger-than-life is one of the things that I brought from the other roles, particularly Madame Lucie, to this role.”

Unlike Goold and Tomaszewski, senior Kyle McDougall is a newcomer to being on the stage. He was in the pit band for both Mary Poppins and Irene. He had originally been planning to be in the pit band again this year, but orchestra conductor and high school instrumental teacher Mark Borden encouraged him to try out for a role onstage and, as McDougall put it, “the rest is history.”
Asked what drew him to the role of Gomez, McDougall said it was the challenge of it.

“Gomez is very confident, very suave and that’s not really who I am as a person,” McDougall explained. “So I really like that idea of challenging myself to play a character who is so different from myself.”

In addition to taking on a lead role like Gomez, McDougall also kept up with his studies and being a member of the boys swim team.

“It forced me to prioritize what I was doing every day,” he said. “At times, it has been pretty strenuous with classes, swimming meets and practices and then rehearsals for the show a few times a week and learning my lines and blocking outside of rehearsals.”

All three students agreed that the experience of putting a show together is something that is truly incredible and amazing.

“I love that aspect,” Tomaszewski said. “It’s something we really love; all the people on stage and the backstage crew giving so much effort to achieve a common goal, putting on a show that will entertain people and be enjoyed by them.”

Showtimes for The Addams Family are March 21st at 7:30 p.m., March 22nd at 7:30 p.m. and March 23 at 2 p.m. and 7:30 p.m. at the District Auditorium. Tickets are $12 adults and $10 for students for all three evening shows and $10 for everyone at the March 23 matinee and can be purchased online at seatyourself.biz/hflcsd or by emailing the box office at hflboxoffice@gmail.com.