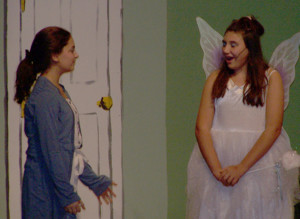 In the photo above, Cinderella (played by Maia Gathercole) and her Fairy Godmother (played by Madison Fleming in a scene from Twinderella.

While everyone knows the story of Cinderella, no one has ever heard about Bob, her long lost twin brother who lives in the same kingdom as she does with a wicked stepfamily of his own. When Louise, the UPS worker, arrives at the separate homes with invitations from the Kingdom of Wychwood-under-Ooze, the duo are both thrilled but forbidden to attend. Cinderella is forbidden to attend by her cruel stepmother and stepsisters while Bob is forbidden to attend by his evil stepfather and stepbrothers. With the help of Cinderella’s Fairy Godmother and Bob’s Godfather plus two enchanted gerbils, they find a way. Cinderella crashes Princess Petunia’s birthday ball and Bob wants to attend Prince Percy’s kingdom-wide baseball game. When the two disappear at midnight, the search is on to find the feet that fit a glass slipper and a muddy cleat. 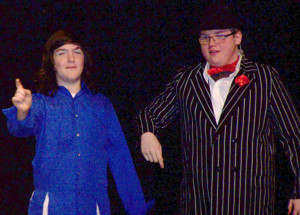 In the photo are Bob (played by Owen Dack) and his Godfather (Braedon Warren) in a scene from Twinderella. Photos by Donna MacKenzie

The show will delight audiences and has humor for all ages.

Tickets are $5 and can be purchased at the door.