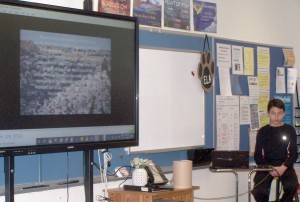 Jacob Camobreco discusses his History Project on the Holocaust. Photo by Donna MacKenzie

On January 23, the Honeoye Falls-Lima Middle School showcased the knowledge that its students have about history with its annual History Expo.

Students in the school work on projects, mostly in groups but sometimes individually, on a topic selected by the National History Day committee for the annual competition. This year, the theme was “Breaking Barriers”.

Projects by students in the sixth-grade class were based on world history because that is what the students are studying. Projects by the seventh-grade students centered around the American Revolution since that is where they were at in their curriculum at the time they began their projects. For the eighth-grade students, they could select any topic from the time period of the Civil War forward to today.

The eighth-grade projects were varied and were either poster presentations, websites, documentaries, Documentaries with Prezi (an alternative to powerpoint presentations), Websites with Prezi or Sway (interactive presentations) or live performances. Presidential Assassinations was a project done by Braeden Weaver, Grant Pinecofer and Miles Stover. Henry Ford and the Assembly Line was completed by Rylan Wagner, Will Baxter and Matthew Wright. Reese Dusett, Conner Morgan and Hayden Payne collaborated on The Vietnam War. Timothy Vukosic and Matthew Peters teamed for a project on the Formation of the Boy Scouts. Haley Luft and Ashley Moodie completed a project on Susan B. Anthony and Women’s Suffrage. The Stock Market Crash was a project done by Antonio Vengoechea, Brody Burke and Aaron Fasick. Nathan Adair and Cooper Levine worked on the First World Series. Domenic Baker, Cameron McCaffrey and Devin Bhaskaran turned in a project on 9/11. The Dropping of the Atomic Bomb was done by Lachlan Youngblut, Noah Close and Michael Dovichi. Elizabeth Blackwell was a collaboration of Meg Grushow and Ava Stefano. Clessie Lyle Cummins and the Diesel Engine was the work of Michael DaGama, James Zona, Leo Belbas and Najjah Dechau. Jack Klaiborne and Peter Morrell produced a project on the Springfield 30-40 Krag Rifle. Alex Boldt and Kyle Burdett’s project was on The Rise of Communism. Shawn Santiago and Yonas Parkinson did a project on 9/11. Lilly Shull and Kaylee White’s project was entitled Niagara Falls Love Canal. Aidan Neenan, Madut Mathuc and Landon Hammond collaborated on The Space Race. Elon Musk and SpaceX was a project of Perry Lanzalaco and Wesley Rinehart. Gabby Gillette, Lilly Marks and Christopher Curjo’s project on The Strong Museum of Play was a VR experience. Paul Iacobucci, Edward Brown and Adam Bianchi produced a project on The Berlin Airlift. Joseph Webster, Jackson Carmichael and Liam Wise’s project was on Police Brutality. Ella Beutner, Mackenzie Corey and Amanda Wager teamed up for a project on The Harlem Renaissance. Galen Henderson, Emerson Goldstein and Liam Henzel-Cronin’s project was on The Jonestown Massacre. The Disabilities Act of 1990 was a collaboration by Maddy Schubach, Zach Tooley and Garrett Moon. John Deal, Justin Pettee and Liam Fischer completed a project on The Evolution of Dirt Bikes. Jacob Camobreco, Braxton Yusko and Josiah Thongphet teamed for a project on The Holocaust. The Study of DNA was a project of Maddy Frederick and Victoria Winseman. Kate Dailor, Kathryn McRae and Eliana Cantwell teamed up for a project on The Wright Brothers. Calvin Burke, Aiden McLean and Andrew Stansbury’s project was on The Manhattan Project. Henry Burke, Riley Cushman and Rowan Lyle completed a project on Barbra McLintock. Abby Fraser, Sophie Torres, Bridgette Lange and Eden Powell did a live performance for their project on Amelia Earhart.