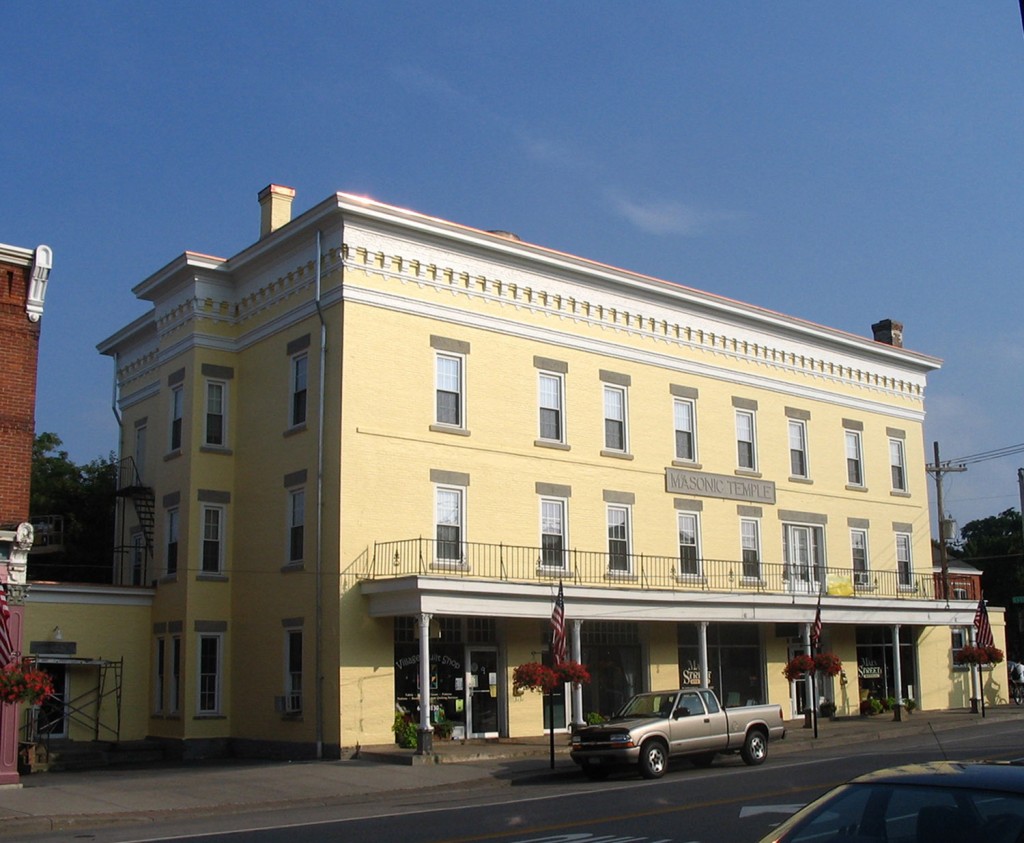 Originally the Falls Hotel before becoming the Wilcox Hotel, 3 North Main St was converted to a Masonic Temple when it was purchased by the Masons in 1920. Union Star Lodge #320 held its first meeting there on Wednesday, November 17th, 1920, two days after the newly renovated building was reopened to the public. Photo by Scott May

In honor of the 100th anniversary of its first meeting in its Honeoye Falls lodge at the top of North Main Street, Union Star Lodge #320, Free and Accepted Masons is asking the community to contribute small items (preferably sheets of paper).

“We’ve been actively promoting and participating in community events since our Lodge was first established in 1854,” says Andy Allan, currently serving as Master of the Lodge. “It’s therefore important for us to invite all community groups and organizations to contribute something that commemorates this very memorable year.”

For example, the Lodge anticipates including copies of this year’s HF-L graduation ceremony, video copies of its Union Star Lounge live broadcasts from last June, and perhaps even a Sentinel newspaper or two.

As of this writing, the Lodge has received interest from the HFL Lima school, the Mendon Foundation, and the Rotary Club. The Lodge itself will include some historic materials like a short history of the Lodge and a reprinted copy of the front page of the December 30, 1920 issue of the Honeoye Falls Times which explains how the Lodge converted the former Wilcox Hotel into a Masonic Lodge.

“Both the Wilcox Hotel and the Masonic Lodge have long been a actual and symbolic center of our shared community,” says Ernie Day, Senior Warden of Union Star Lodge #320. Day has been in contact with both Mendon Supervisor John Moffitt and Honeoye Falls Mayor Rick Milne, both of whom have expressed enthusiasm for the time capsule project.

The Lodge plans to entomb the time capsule, which is actually sealed stainless steel measuring 18”x18”x4”, within a portion of an old closet within the basement of the building long made unusable when the old bank vault was installed.

A brief ceremony is planned for November 15th, 2020, which marks to the day when the new Temple was first opened to the public in 1920. A plaque indicating the precise location of the time capsule and instructions that should be reopened exactly one hundred years hence, on November 15th, 2120 will be located in a prominent place within the Lodge room.

Community groups and organizations interested in sending a historical message to the future are encourage to contact either Andy Allan at andyscottsman@gmail.com or Ernie Day.