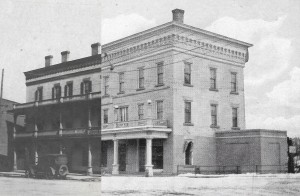 The Evolution of a Landmark: The montage of two pictures provided by the Honeoye Falls/Mendon Historical Society show 3 North Main Street both before (left as the Wilcox House/Hotel) and after (right as the Masonic Temple) the building was purchased and then renovated by the Union Star Temple Association in 1920. Montage created by Chris Carosa

The January 7, 2021 meeting of the Honeoye Falls / Mendon Historical Society will be a virtual meeting on Zoom.  Our speaker will be Chris Carosa.

You know Chris Carosa as the publisher of our local newspaper The Mendon-Honeoye Falls-Lima Sentinel. But did you also know he’s known as “The Hamburger Historian”? Well, he’s gone down plenty of other historical rabbit holes, especially those burrowed within the Greater Western New York Region. He’s a Senior Contributor at Forbes.com, President of Carosa Stanton Asset Management, and Chairman of the Board for the Bullfinch Fund. He’s past president of the National Society of Newspaper Columnists and serves on the Board of Directors for the New York Press Association and the Yale Science and Engineering Association. He’s a graduate of Yale University (where he majored in Physics and Astronomy) and earned his MBA from the University of Rochester’s Simon School (where he concentrated in Finance and Marketing).

Here is a summary of what the program will cover:

Today we know it as the Masonic Temple building. Indeed the local Masonic lodge first met there 100 years ago on November 15, 1920. But before that it was the literal center of town – The Wilcox Hotel, owned by prominent Mendon businessman Sylvester Wilcox, and before that, the Falls Hotel. Before that, the site was occupied by the town’s first tavern, strategically located on a well traveled road in a growing community.

Discover the peoples, places, and predicaments surrounding this fabled piece of real estate and its connection to the Honeoye Falls-Mendon Historical Society as Chris Carosa reveals the fruits of his research that became a series of short videos on local history.

This will be a virtual meeting on Zoom.