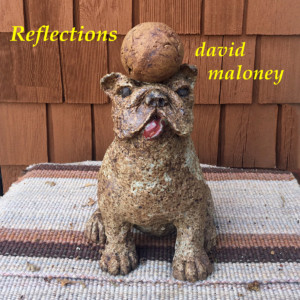 The CD, Reflections, is his 12th solo recording. He has also recorded several CDs with former singing partner Ginny Reilly. The duo retired their musical partnership of 45 years in December 2016.

An Evening with David Maloney in Concert will be Saturday, September 29 at 7 p.m. at First Presbyterian Church , 27 North Main Street in Honeoye Falls. Maloney, a Honeoye Falls High School Class of 1961 graduate and a member of the Honeoye Falls-Lima Alumni Hall of Fame, is a two-time Grammy Award nominee, in 2011 and 2013. This is his first concert in the area in two years.
Maloney, based in California, remains active in a solo career and still has tours around the country.

At the concert, he will perform songs both old and new. His warm stage presence and his songs and stories resonate deeply in the hearts of listeners.

“Throughout his long, nourishing career, David Maloney has fine-tuned his craft as a visionary songwriter and affecting storyteller. David’s intuitive and personal delivery is something fans everywhere have come to cherish,” according to an article in the Seattle Weekly.

One of his CDs is an ode to his hometown of Honeoye Falls. Other songs that he has written recall historical events and people such as the Miracle on the Hudson (when an airplane pilot made an emergency landing in the Hudson River after an engine failure and all were rescued safely) or on late singer Michael Jackson.

Admission is $15 to the concert.